The HitBTC Exchange: For Whom McAfee Tolls

Shitcoin listings, fake trade volumes, a bot factory, disgraced partners and the total anonymity of one of the top crypto exchanges of our time. Here’s why you should stay away from it.

The great and fearsome John McAfee has been waging war against HitBTC for the past few months. He dislikes how the exchange conducts its business so much that he’s willing to donate $20m for a lawsuit against it.

It’s hard to believe in this man’s philanthropic intentions. There has been talk that he was generously paid by competitors of HitBTC for this speech. And the very idea of a trial seems absurd if you don’t even know who to sue. The identities of the exchange’s team members are unknown. While the website is registered in the USA, its true location is hidden – official information points to Chile. Basically, it’s all up in the air.

Nevertheless, McAfee is right about that fact that HitBTC doesn’t conduct its business like a decent exchange should. We got through a few bags of crisps before working out what’s actually going on there. We hope you like it. 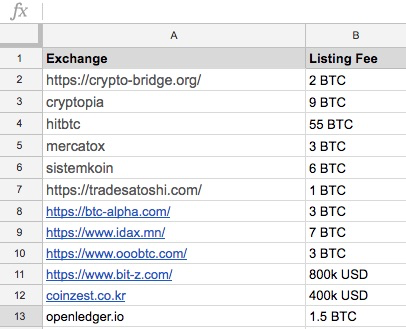 A listing on HitBTC costs a real shitload. On the one hand, this can be explained by the fact that the exchange is one of the 5 most active crypto trading platforms.

But just look at the number of tokens traded. Only Cryptopia is home to more dross. Why, with all your resources, are you incapable of doing a minimal audit of each startup and thinking with your brains instead of your wallets? Isn’t your reputation important to you?

ZrCoin, Revain, SaveDroid, SONM, LAtoken, Matchpool, DADI and DragonCoins are scams that it’s hard to forget about. It’s certain there are some equally “successful” projects among the other 800 pairs. And they’re all traded on HitBTC. We’ve already pointed out some similar crap that was being pulled by another exchange, Kucoin. They didn’t hesitate to list shitty projects either and turned a blind eye to numerous pump and dump schemes. The lemmings took quite a hit.

Here’s a brief description of the exchange from the admin of popular trader community Wolf Crypto. We agree with him wholeheartedly.

It hides its data and is not registered

As this fairly good investigation noted, the scary thing is that you’re trusting people you know nothing about with your money. Logically, this is even more dangerous than selling Bitcoins for cash in a dark alley. 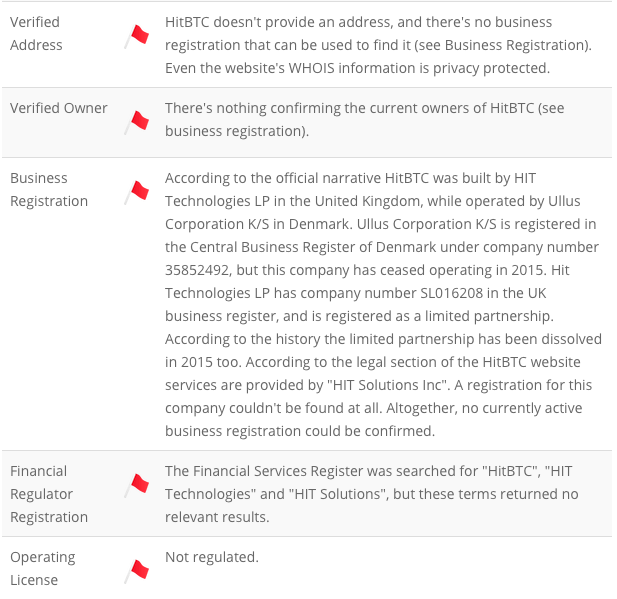 The team members themselves, who in theory could turn out to be your new neighbours or the Dalai Lama, also shrug off any liability for what occurs on their exchange. Imagine a drunk taxi driver telling a passenger before a trip that he’s not responsible for what happens to them. Fucked up, right?

Here’s some great research about how honest the top exchanges are. The authors used publicly available information and their own formulas to calculate who is artificially inflating their trading volumes. It is highly likely that HitBTC and OKex are guilty of this. 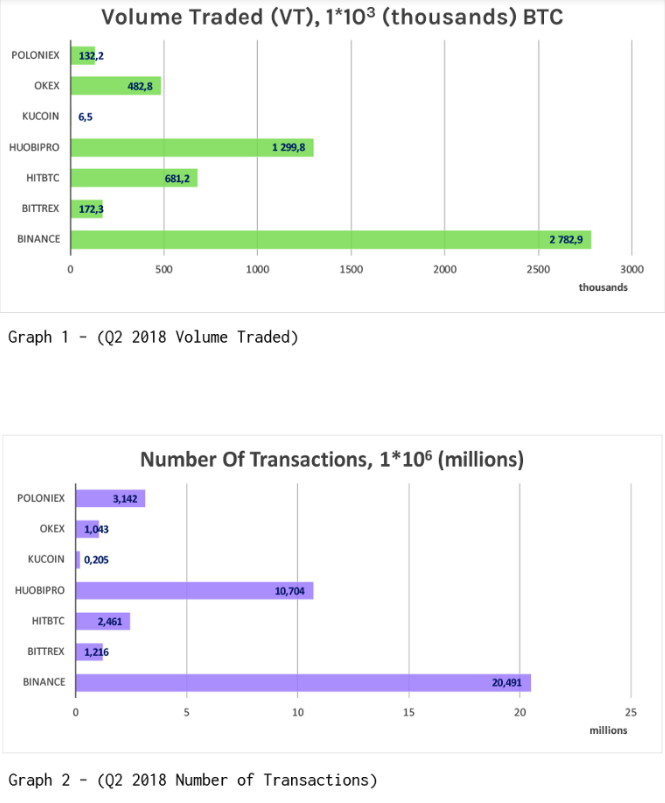 You don’t have to be a crypto master to understand that something is wrong with HitBTC. This is the weekly trading chart of a normal exchange.

Lets clients pump the shit out of their coins

Remember the story of Revain, when we told you that the project was shit and the rapid growth of its token was a sham because it was being pumped by the founders themselves? That all later turned out to be true. Those not in the know lost their money.

The practice of pumping and dumping taints many exchanges. But there are some fools on this planet who think that it’s a cool and fun thing to do. 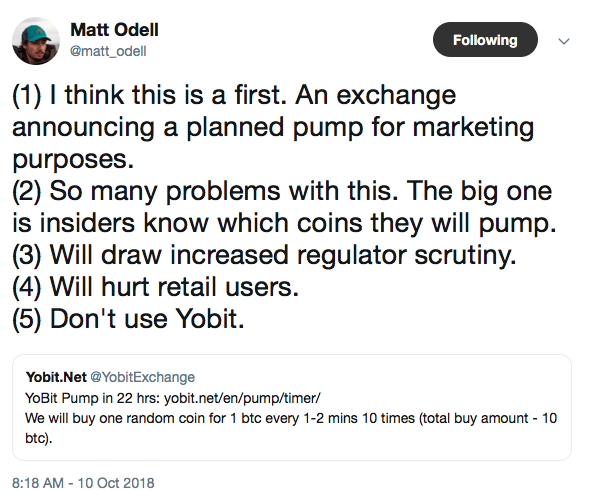 And there are also some sly bitches who sort of get that it’s wrong, but do it anyway. Pecunia non olet, at the end of the day. HitBTC is one of the latter. As well as listing dickcoins, they turn a blind eye to exchange rate manipulation. Let’s look at a recent foul-smelling project from Lithuania – Provoco (the one with the art startup Prodeum Penis). The boys have barely finished their sale and there’s no sign of any product or large partnership, but their token is jumping around like the Easter bunny. The trading volumes are solid too. This paints a shitty picture, to put it mildly. 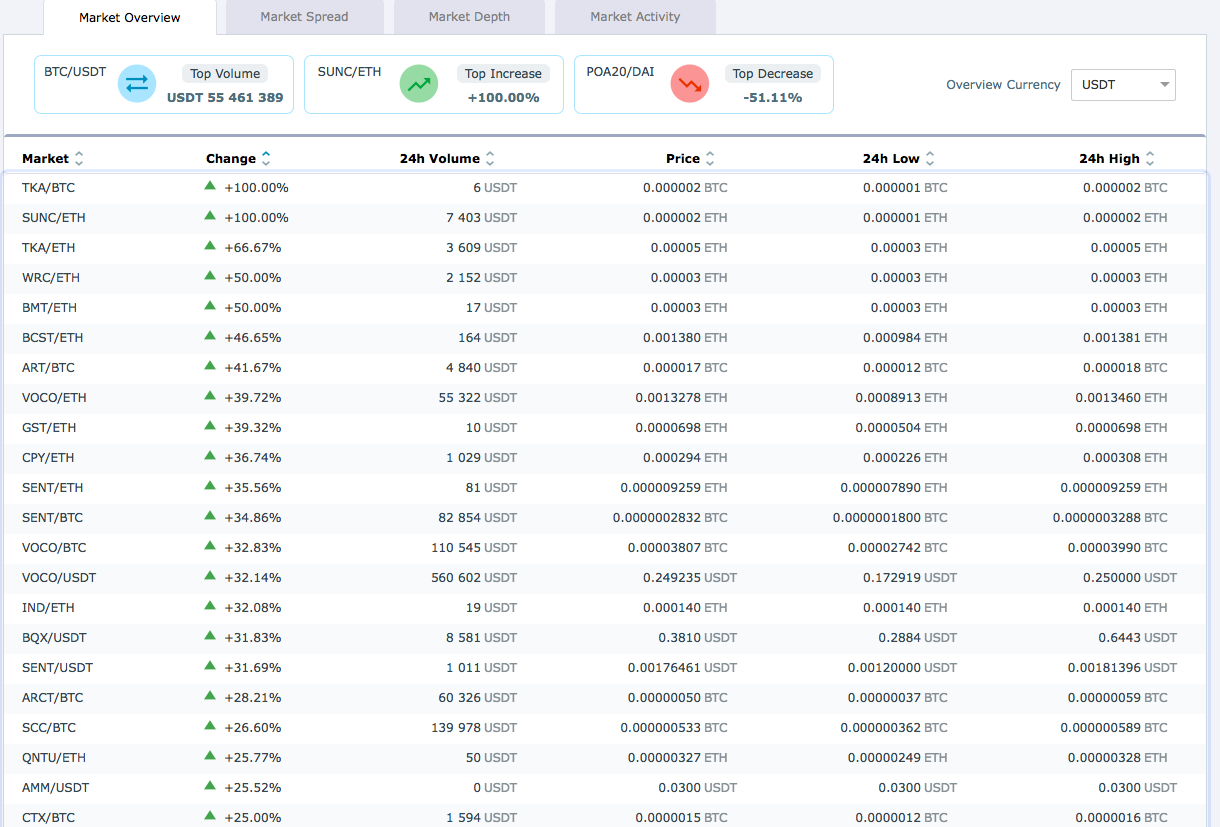 The official HitBTC website tells us the exchange works with the company Weltrade. If it wasn’t enough that it’s a forex kitchen, which in and of itself is often synonymous with “con”, it’s also very poorly regarded in its niche. 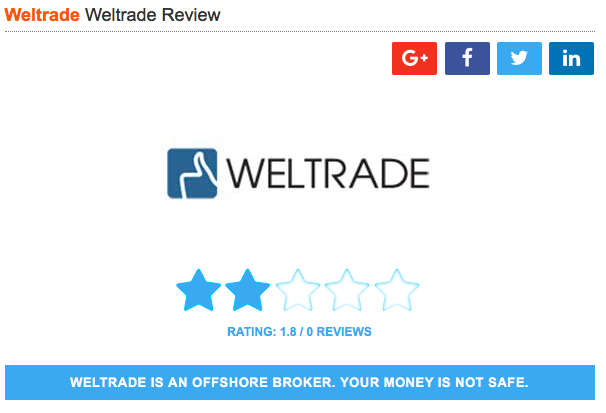 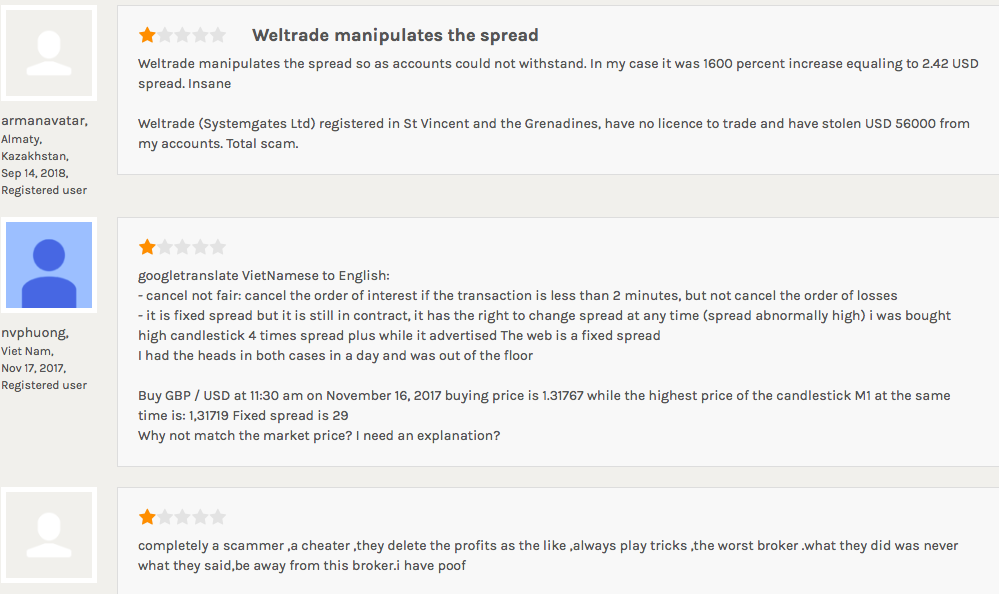 Is constantly embroiled in scandal

It’s amazing that HitBTC remains one of the market leaders with such an attitude towards its work. The exchange’s supporters point to the transaction fee, which is apparently lower than that of competitors.

But who cares about the commission when you could be left with nothing at all?

Here’s a story about a guy who was conned out of 150 ETH. 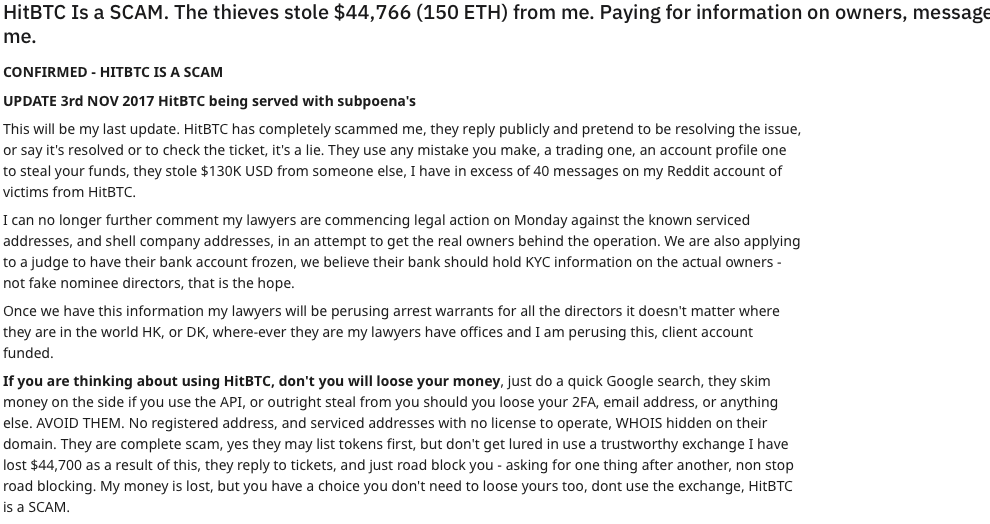 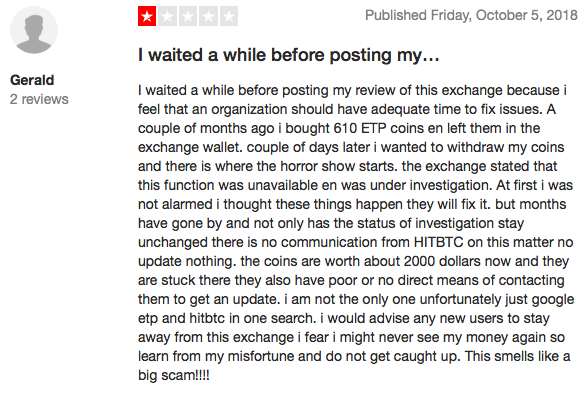 This user is annoyed by the amount of personal data that the exchange requires for KYC. 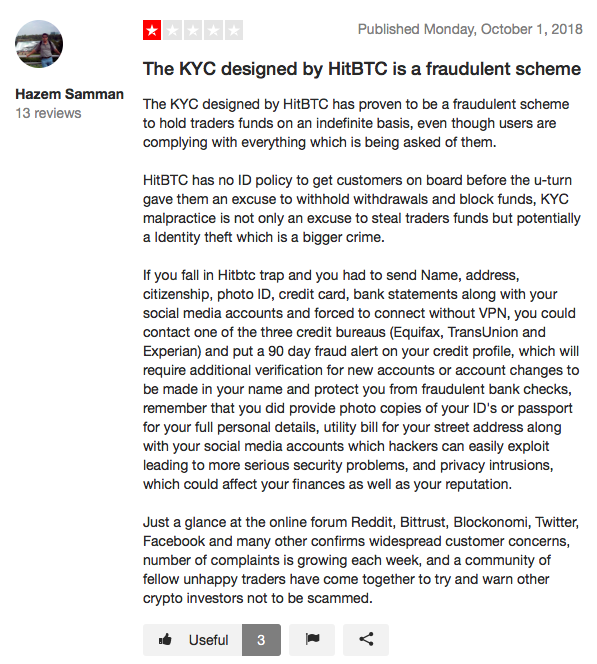 And, of course, let’s not forget the inevitable conflicts with startup founders. Remember how Kucoin took the money but forgot to list projects? Same thing here.

Has created a bot army

After releasing our investigation on Kucoin, we were banned from Twitter. We wouldn’t be surprised if something similar happens this time. After all, instead of improving their operations and stopping the fuck-ups, the project is wasting energy and money on combating negativity on the forums. It’s not like they’ve even come up with anything new. Everything is more or less a variation on “It’s the best exchange ever”, “I made big money on HitBTC”, “I’ve been with them for 2 years and am absolutely satisfied”. There’s an absolute fuckton of these acounts. 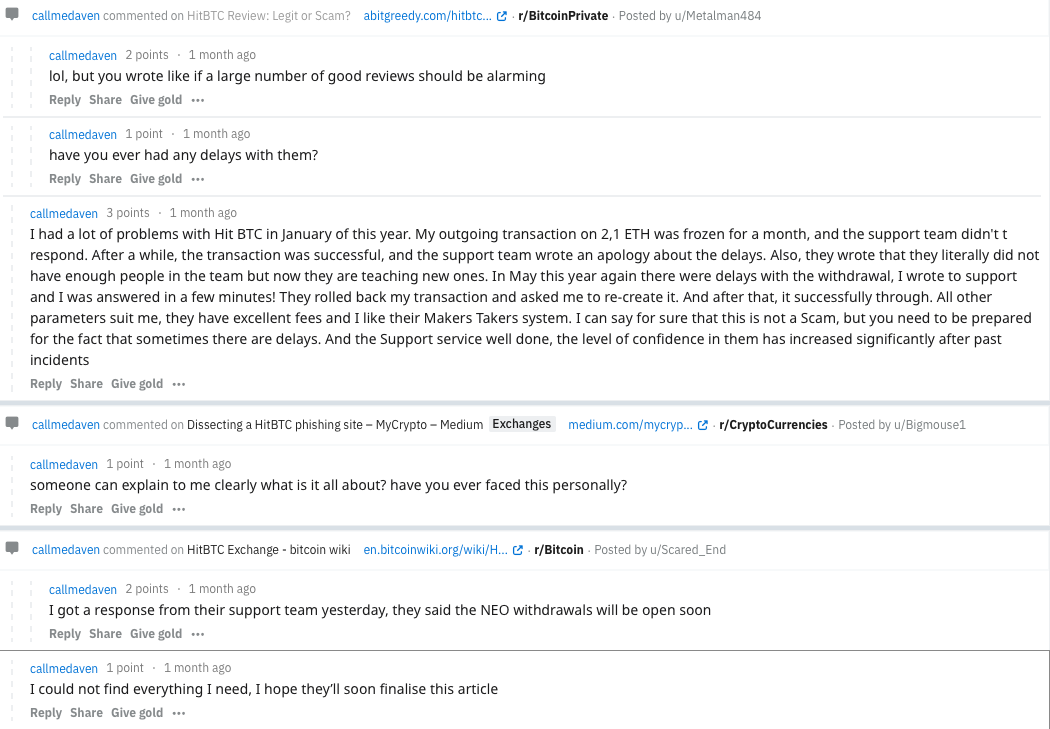 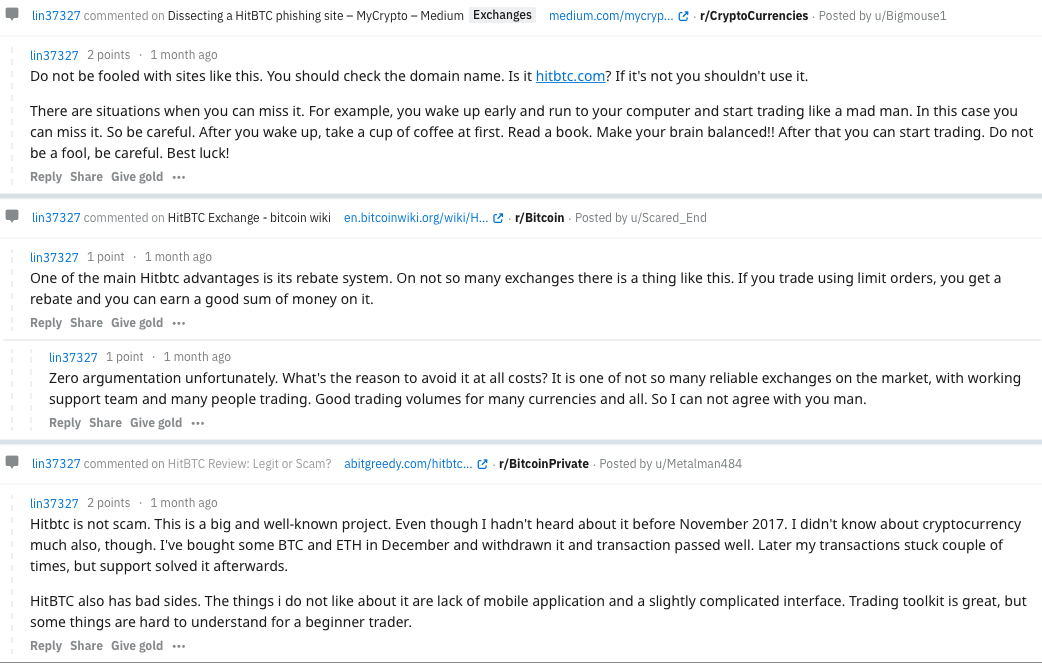 But the bots will never be capable of shutting everyone up.

It’s likely that sooner or later (for example, the next time Bitcoin peaks) the creators of HitBTC will do a Mt. Gox and transfer traders’ funds to God knows where. Accusations will be hurled around against the North Korean hackers from Lazarus, and the Russians, Chinese and McAfee will be mentioned, but it’ll be too late. A page will be turned and everything will start all over again. But it doesn’t have to be that way 🙂

With faith in the bright future of blockchain, we wish for you never to be scammed by anyone. Tell us your opinion about HitBTC and send in projects for our next investigations. See you soon!