Our second spontaneous article about the re-villains who have not only successfully raised plenty of cash from their crowdsale, but also launched their R token on exchanges. Where its price rose from $0.18 to $4.50. Let’s spell out why this is another trap laid by frauds and what expensive cars and the Guinness Book of Records have to do with it all. 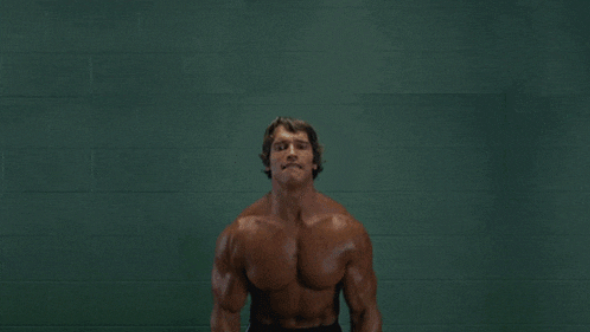 We looked at Revain’s ICO 3 months ago. Back then, we pointed out the many inconsistencies in the plan announced by the self-proclaimed revolutionaries of the customer reviews world. Nevertheless, just before New Year their token began to grow rapidly in price. This looked unusual, because the project launched by a gang of shady no-names hadn’t done anything of interest. And also because the entire cryptoworld had the shit knocked out of it by price corrections. On 18 February, the Revain R token reached $4.49 and then started to drop. Its value is now $2.35. Let’s see if it’s worth waiting for the next pump. And what makes Revain different from a standard Ponzi scheme? (Spoiler: almost nothing)

Revain’s TO THE MOON moment coincided with a competition. Its rules are simple: buy a fuckload of R tokens during the specified time. The most generous participant gets a free Lamborghini Huracan (average cost – $400,000). The less fortunate get prizes in ETH. And the deadbeats get nothing. Especially given the fact that after the competition the token’s exchange rate began to decline. 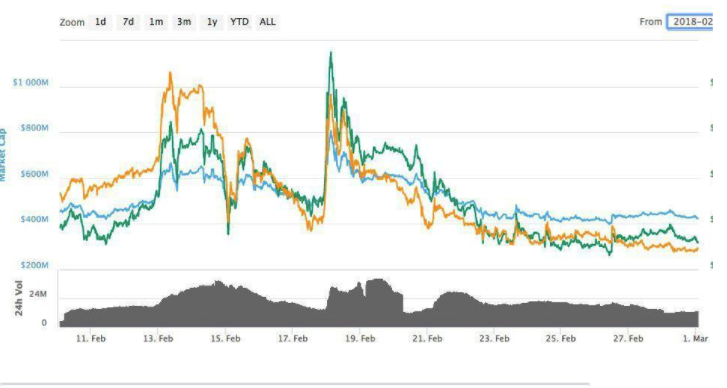 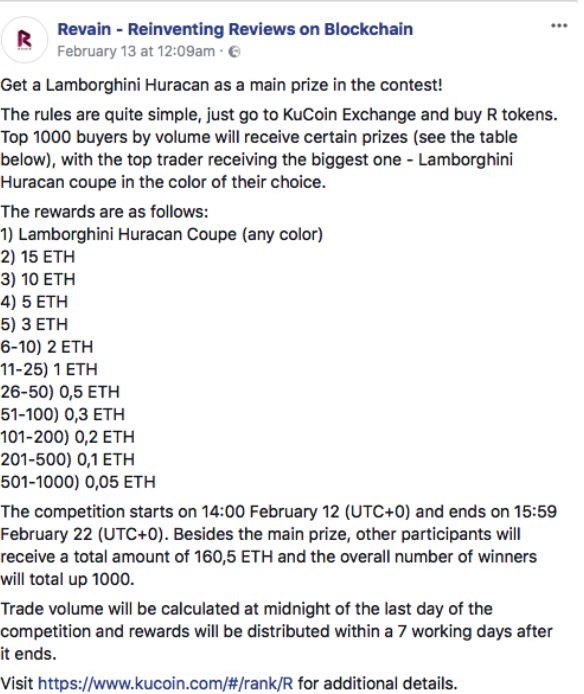 We should point out that the email address of the winner starts the same way as the company’s name. Very symbolic.

At first, some weren’t exactly delighted with the competition and expressed their views. 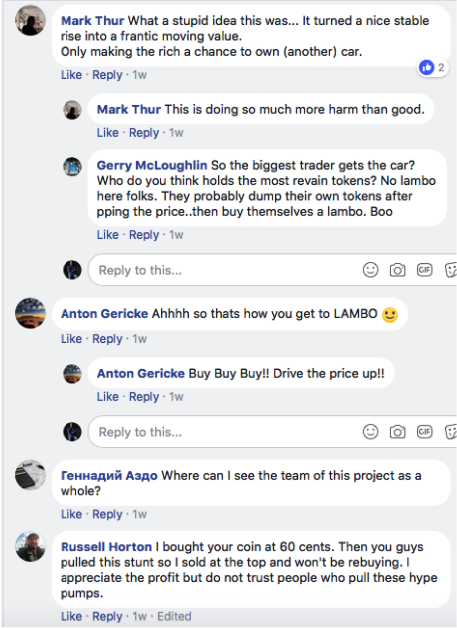 And then all hell broke loose! 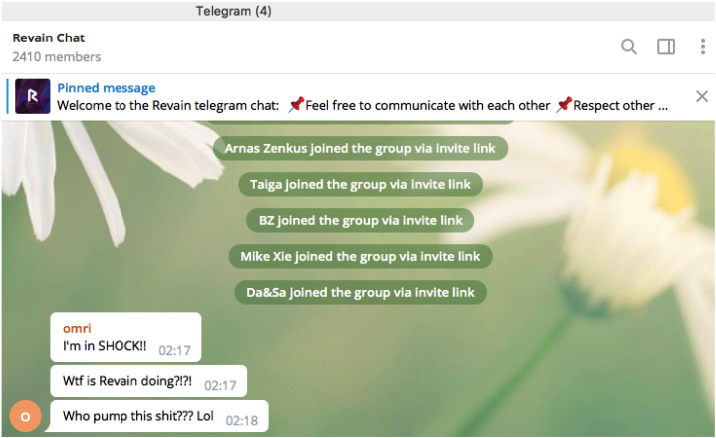 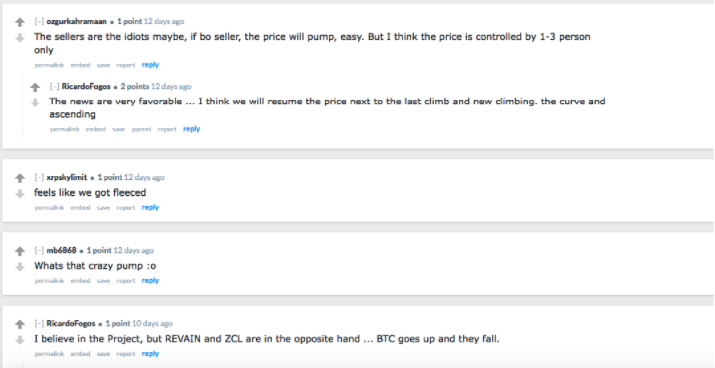 By 15 February, the Lamborghini effect was no more and R went down in a beautiful ball of flames akin to the Hindenburg in the evening sky of Manchester Township. Our boys didn’t flinch and launched a massive ad campaign. On 18 February, the official Revain chat was joined by loads of new crypto enthusiasts and the exchange rate started to moon again. 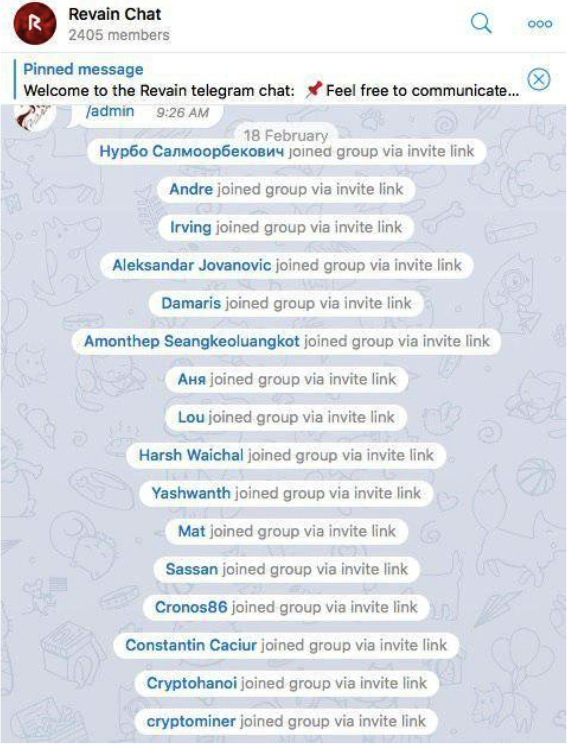 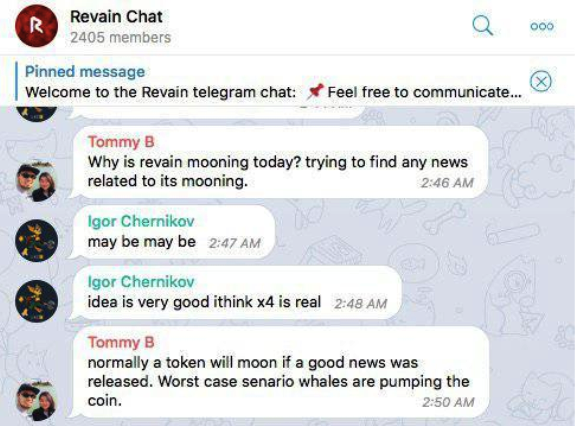 Pumps for a Giveaway 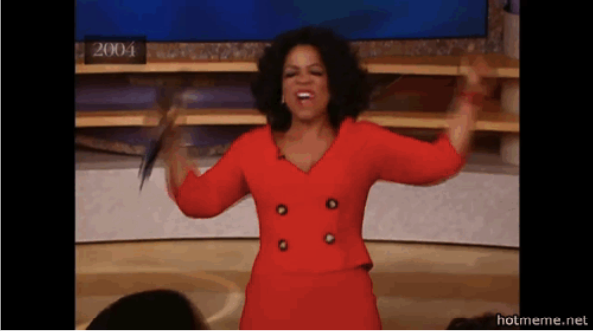 The winner didn’t even have time to change the oil in their new Lambo before the inventive lads at Revain came up with a new contest. The prizes are equally lavish and again destined for those with the deepest pockets!

So a new wave of mass buying is coming, which means that R will be on the rise. And then on the fall. Afterwards it might soar again, if the crypto public doesn’t get sick of them. 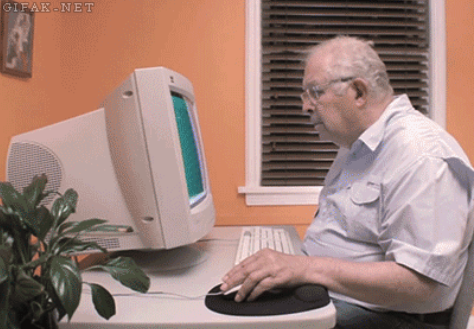 Everything else at Revain has changed about as much as Maycomb during Scout Finch’s time at school there. The same old bots, inflated numbers of likes and reposts, fake comments and other crap inherent to scams. 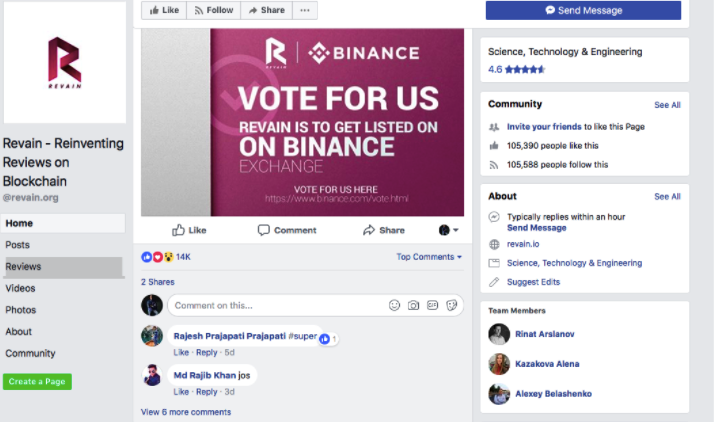 Perhaps because of our previous analysis, the boys realised that they should reduce the difference between the amount of bot subscribers and the number of likes for each post. Even quite recently it looked like this. 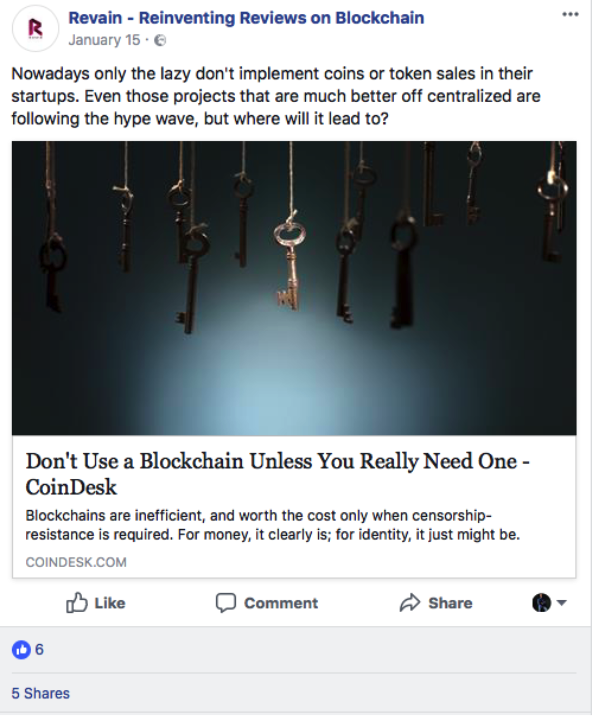 They should have really rounded up some more subscribers though, as their number has seen no dramatic changes. Given the abnormal recent increase in activity, this still looks fishy. Things are bad in the corporate channel on Telegram. Just look at the number of views. Compared to this, even the new algorithms on Facebook are a godsend 😀 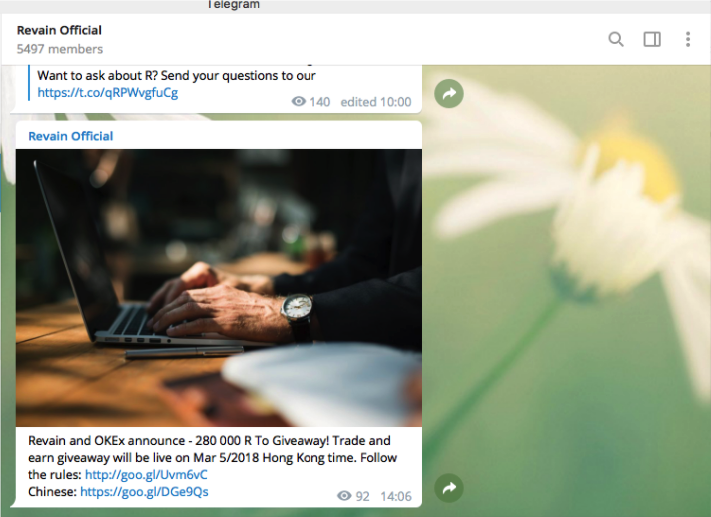 The Product and the Guinness Book of Records 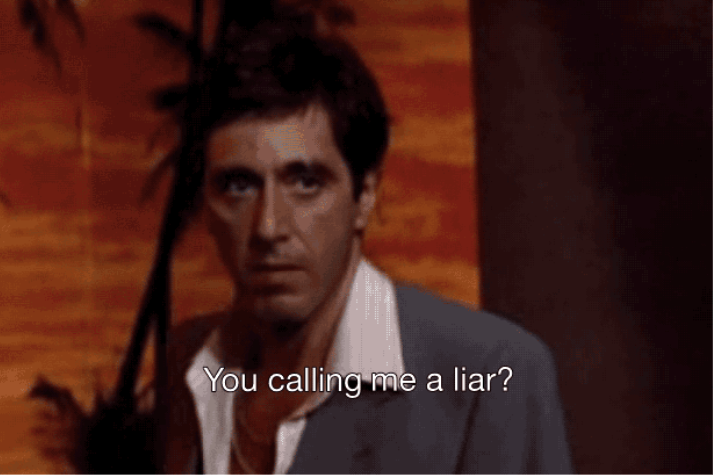 The Revain platform has finally started operations, although it really shouldn’t have. At the moment, it only hosts a rating of cryptocurrencies based on reviews that we can’t see. Bitcoin is in 33rd place, Ripple in 41st. But to make up for that, the reliably unreliable Status token and possible scam Voise are sitting pretty at the top

After reviews about crypto, the guys will start to put together ratings on another hyped-up topic – computer games. Don’t be surprised if PUBG and CS:GO take lower places in the ranking than the latest version of the Sims.

We can only guess if the project team made reviews of their advisors or not, but none of the old ones are left. The old roadmap is gone too. But to make up for that, the new advisor is worth an entire squad of Jobs and Wozniaks. Meet Dmitry Fedotov. This man sells everything: from brewskies and helicopters to seafood. But the real crazy shit comes in his achievements and skills – he lists an entry in the Guinness Book of Records and his ownership of a Formula 1 car. 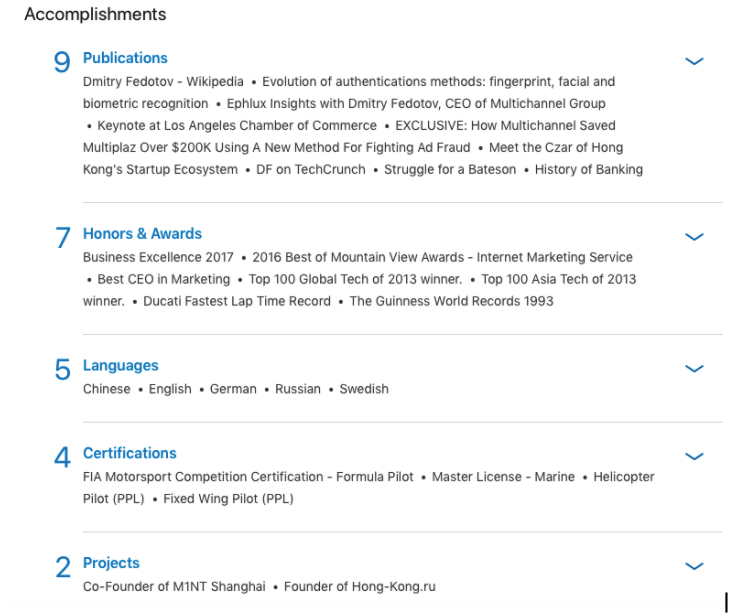 Uhhh. What else is there to say? If some R coins have for whatever reason ended up in your wallet, you’d better sell them at the next peak. Revain is a team of obvious rip-off merchants. If you’re looking for thrills and adrenaline, you’d be better off going to the casino than getting involved with these gypsies. Remember the cinema classic?

The lads have the right audience anyway. Amen! 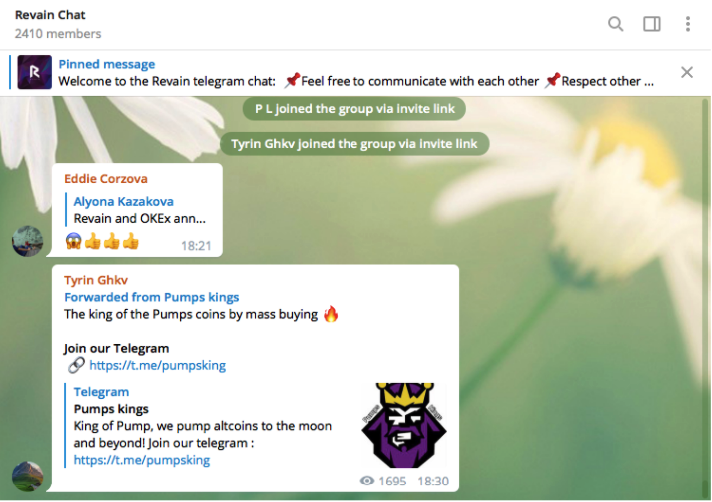