A dramatic story about a fresh scam from Moscow’s “silicon valley” with a whitepaper in Russian, a fake team and an undisguised attempt to cheat the Howey Test. Oh yes, and the mission of the would-be product is to rid the world of piracy and fraud.

Fast and affordable internet has made life easier and more pleasant, but it has shot copyright right in the face. Films, books, music and photos are now available to all in huge quantities for absolutely nothing. Copyright holders hold this enormous power to use in marketing activities, but their profits have come up short due to pirated copies. In a nutshell: if you want to dance, you have to pay the piper.

The creators of StopTheFakes believe they can change the situation. For this purpose, they have invented an analogue of the Pinkerton Agency. Except they won’t be hunting for heads, but counterfeit goods.

The name is strong and powerful. A bit like FuckThePolice 😀

The website isn’t the most attractive and special one you’ll see today. It doesn’t catch the eye. 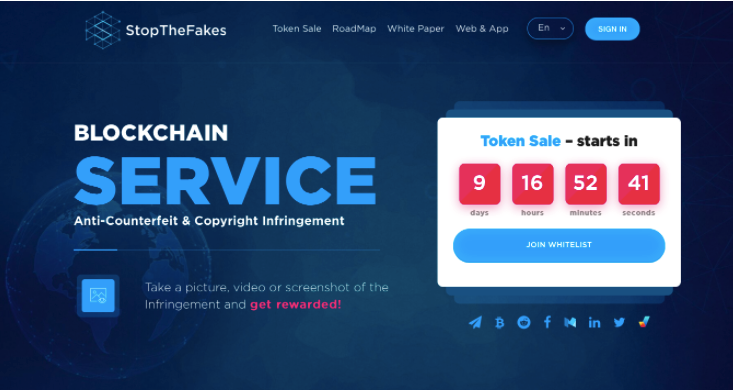 According to ancient marketing tradition, the storytelling begins by identifying a problem. Counterfeiting is terrible. American cinema loses 58 billion dollars a year because of it, while fake pill peddlers flog $200bn worth of products over the same period.

Then the plan calls for glad tidings. Something like “Hey guys, we know how to stop the enemy! Watch our flashy video about the project.”

And while we’re at it, the creators demonstrate finished prototypes for browsers and Android devices. This is commendable and inspires confidence. A convenient scheme shows how everything will work and the road map promises that as early as in June the service will help to record 5,000 copyright violations.

Next, there is the usual: team, advisers, Medium, Github (only the code for the token, not the platform itself) and media publications. Here, we need to give some advice to the people who are responsible for the latter. Be more careful with your articles and don’t make mistakes like this one.

The StopTheFakes Facebook page, unfortunately, smells like a fake. The social network’s ban on ICO and cryptocurrency advertising has increased the earnings of services that inflate like, share and subscriber numbers. Note the almost identical number of likes and shares. The “promoters”, most likely, didn’t go to much trouble and just put 300 in each field of the order form. 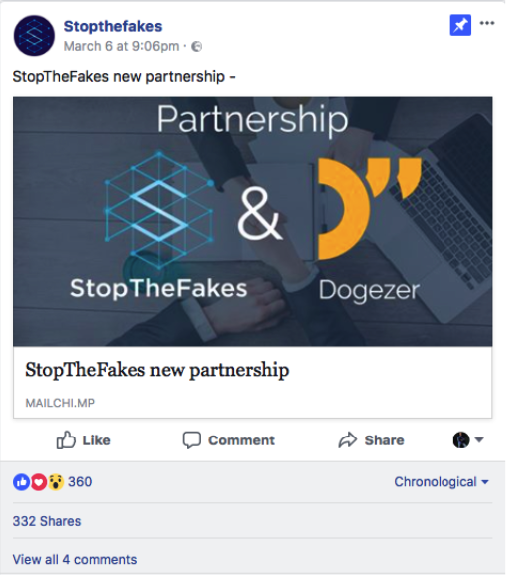 Check out the profiles of those who shared the post. Their feeds are entirely composed of either StopTheFakes reposts or a variety of other ICOs. 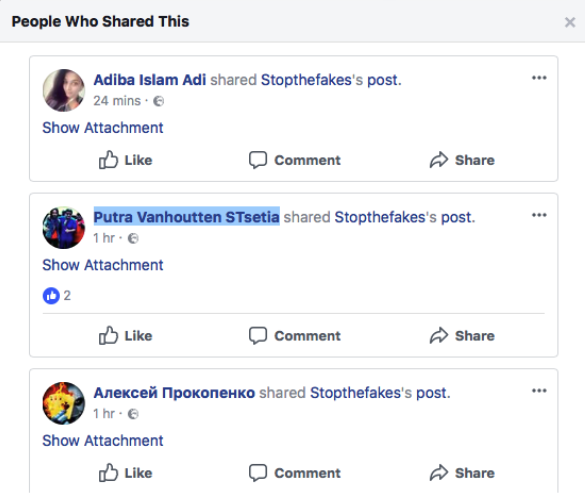 Thankfully, at least comments can’t be faked. There are only ones like this (again, have a look at the profiles of the people who leave these reviews. They’re something else). 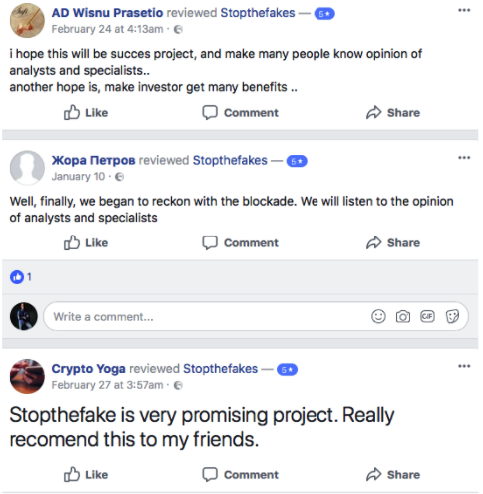 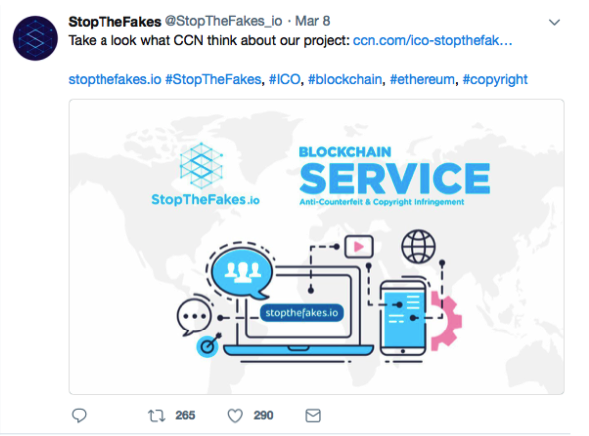 The StopTheFakes chat on Telegram is filled with the standard questions: bounty, pre-sale, sale, careful-it’s-a-scam, a popular channel on YouTube wants to help with promotion, etc. By the way, StopTheFakes need to do more work on their YouTube. The view counts are on the small side.

The 57 pages of the whitepaper will instantly transform you from a languid cryptoinvestor into a student preparing for their exams. The amount of important information doesn’t justify this length. If you have shitloads of free time, you can read it.

But just in case, we’ll cut it down to three paragraphs.

Counterfeit goods hit corporate incomes like Thor’s hammer. Above all, this impacts cinema and pharmaceuticals. Companies suffer losses, cut costs and lay off workers, while customers get a low-quality knock-off product.

To combat counterfeiting, StopTheFakes are creating a platform on which their clients (manufacturers) pay for tracking of their knock-off production. The records become part of a smart contract that is used to file a case against the manufacturers and sellers of the counterfeit goods. Whoever reports the violation (us, you and pool boy Ramon) is rewarded for their photo, video or screenshot evidence. The bounty for a head varies from 15 to 100 STF (the exchange rate of the platform’s token is fixed for all eternity at 1 ETH = 2400 STF). Today, that means $35 for the biggest possible catch. Impressive? In the future, when there are more orders, the price of the token is sure to take off. Maybe it’s worth getting the fuck out of all this crypto nonsense and becoming a Pinkerton?

As a result, consumers themselves will have an incentive to sniff out counterfeit products. And thanks to BigData, the companies will receive information on the location of Abibas and Nice production, their sales and even a portrait of their buyers. In the end, a genuine, new world will dawn for humanity. While the service will earn a lot of money thanks to the 15-25% commission from a client’s payment.

A prototype of the product is ready now. Money just needs to be raised at the ICO and in May 2018 we’ll get a finished browser extension. In June, the iOS app will be released. 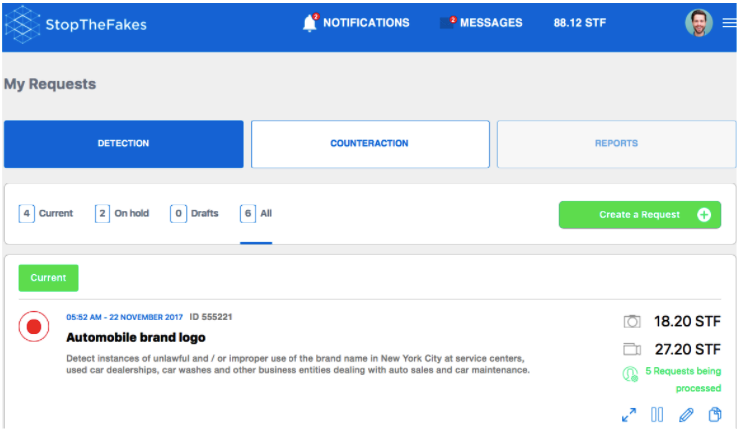 Nevertheless, the whitepaper doesn’t explain how to:

The company’s CEO Mikhail Krzhanovsky is a real person. At least it that’s what it looks like in this video (there are English subtitles).

But there are also some very strange goings-on (would it really be a Russian blockchain without them?). There is no particular information about the CEO outside of StopTheFakes. Social media isn’t too helpful either. But on the other hand, Mikhail is friends with such a person as Sergei Krzhanovsky. He’s the deputy general director of the Skolkovo Technopark (Russia’s answer to Silicon Valley), the son of a well-known construction businessman from Astrakhan (the former HQ of the Golden Horde) and studied at the same university as Mikhail.

At first we thought the boys were brothers. But a Russian-speaking comrade of ours scoured the web to find here that Astrakhan businessman Nikolai Krzhanovsky only has one son.

On this basis, we assume that Mikhail Krzhanovsky is actually a John Doe who, with a helping hand from Sergei and the other Skolkovo swindlers (it’s a mecca for scam projects), has become the fictitious head of an ICO that will rip off its investors.

This character confirms the theory: 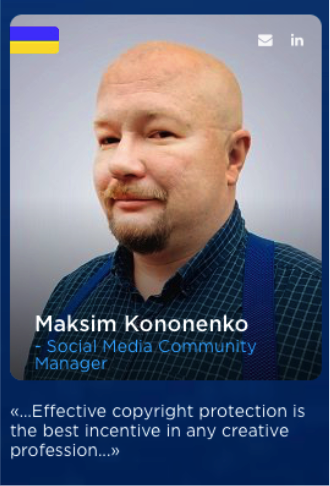 There is no information about the “celebrated journalist and SMM specialist” anywhere except for LinkedIn. Which is very strange these days. But to compensate there is Maksim Kononenko, a popular Russian pro-government journalist and blogger who likes to speak out against Ukraine and the United States. The bogus Maksim Kononenko is a Ukrainian citizen. So the creators of StopTheFakes at least have no problems with their sense of humour.

The startup’s advisers include a lot of silver-haired Russian dudes and Reuben Godfrey. 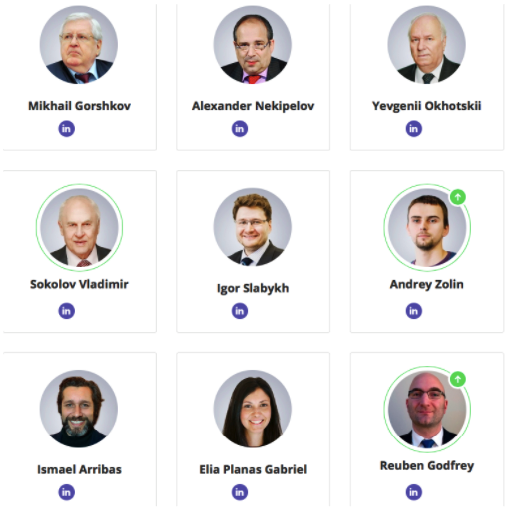 This man will definitely make it into our next Scam Advisers digest. He has participated in almost 20 ICOs, many of which are of very dubious quality.

Sale and Distribution of Funds

The pre-sale is over. It has been announced that all 544 ETH were raised. Let’s see how the sale goes. Meanwhile, the only topic in the Telegram chat is the bounty programme.

Officially, the tokens are not an investment tool and are created solely to pay for the platform’s services. Copyright holders who purchase them during the Pre-sale/Token Sale and put them on the platform to order services get additional discounts. Therefore, STF doesn’t fall under the third paragraph of the Howey Test.

That’s what the founders of StopTheFakes say anyway. In reality, it’s just a normal investment. How will they be bought by manufacturers who are suffering from piracy if they don’t know the first fucking thing about them?

The project’s headquarters are officially located in Prague. The team of advisers is made up of Czechs, Ukrainians, Spaniards and Irishmen. But for some reason the whitepaper was written in Russian.

Don’t you think that the fighters against fakes need to start with themselves?