The inheritors of Genghis Khan thought they’ll be able to fool everyone with some feculent IEO worth a shitload of money. Find out here, whether they’ve succeeded.

Hey, guys! This time there would be no long curtain-raiser, as soon as the time is money ‒ literally. It is essential for anyone who’ve decided to put their savings into this crypto bubble to think out twice before making a decision that will leave your pockets completely empty.

There once was a small niche exchange IDAX which could be found on a 12th place in an exchange top list Coinmarketcap.

The guys don’t tell a lot about themselves. The only verifiable fact which we were able to get was that their “international” startup is somehow supported by the Mongolia government.

However, in their official Twitter account, they directly call themselves Mongols. There they also ask different companies to come through their exchange website. All of this looks kinda pathetic. 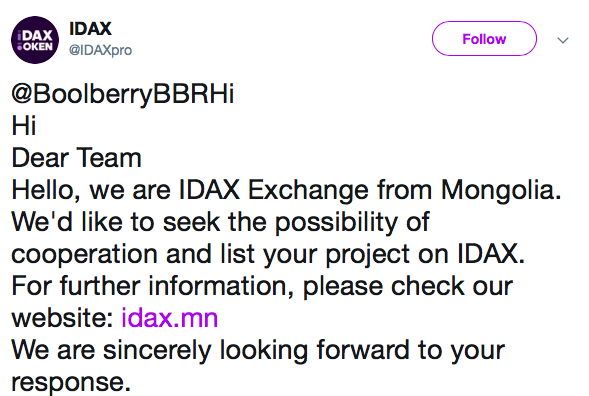 More to the point, they look like Mongols just as much as did the heirson of Genghis Khan from an unheralded “The Shadow” movie ‒ which means not at all, even slightly 🙂

There are no proofs of their clean conscience as well. Google keeps silence, so we haven’t found any records of their previous activity ‒ either upright or scamming. If you’re armed with any kind of information considering guys, we would be extremely grateful if you’ll share it with us. 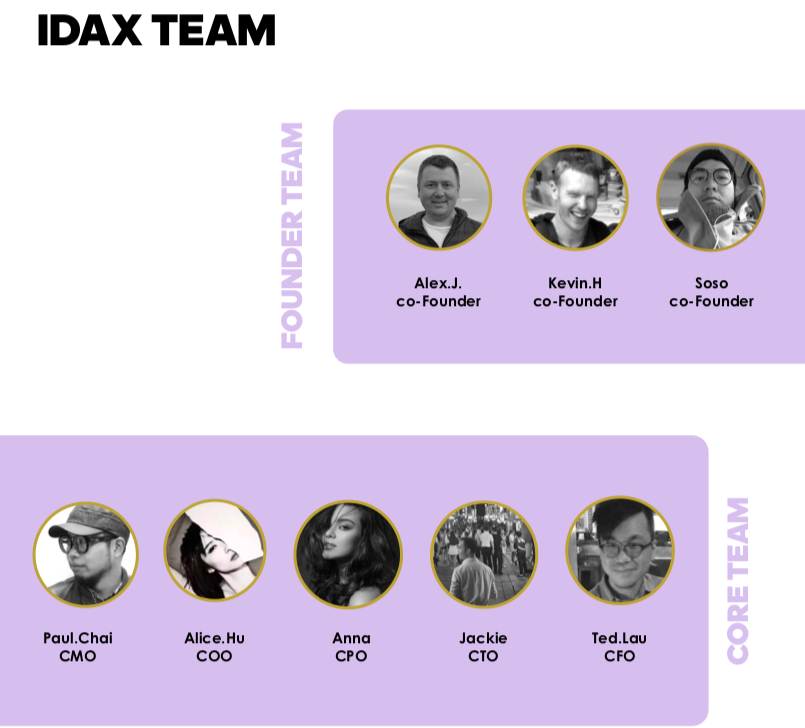 The website of the exchange is registered in Japan. When the founders will finally decide to what country they belong is unknown. 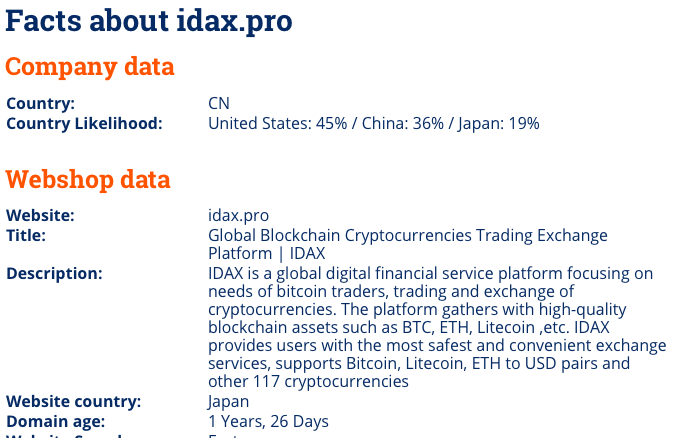 Let’s for now give the question of nationality of these bigshots a break, and concentrate on the poorness of their IEO, which they push forward so eagerly.

In the nearest future IDAX is conducting a sale of a Blabber startup. The main thing you should know about Blabber is that it’s a fraudulence of blackest dye. For starters, it’s quite enough to read their loud claims about the trunkful of experience in corporations leading AND Blockchain coding to start scenting contrariety.

Like, WTF, guys? You either screw around a pompous office or fuck 24/7 with the code, there’s no third option. But whatever, it’s a blatant scam anyways. Here are some evidences: 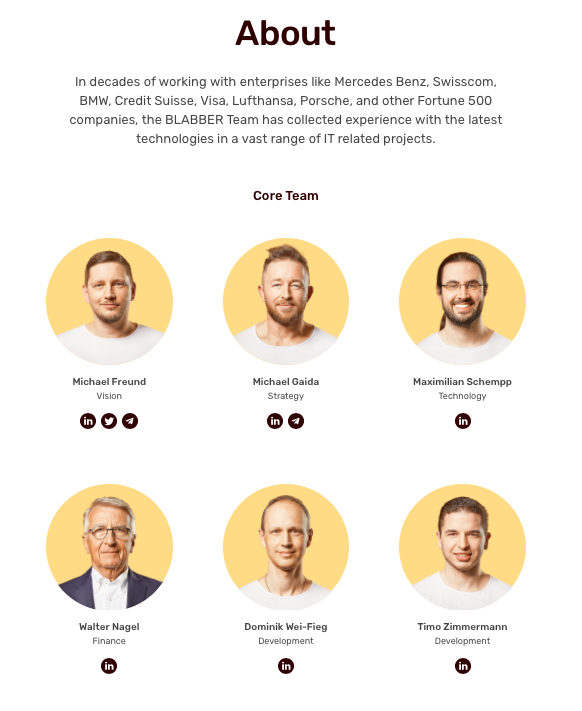 Don’t forget to remove the wool from your eyes after reading this. Mercedes Benz, BMW, Visa? It doesn’t hurt to dream.

And here are the screenshots from the founders’ LinkedIn profiles. Just to make sure that further down the road their “Porsche” and “Lufthansa” cooperations wouldn’t mislead you. 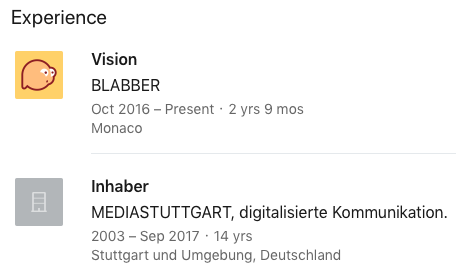 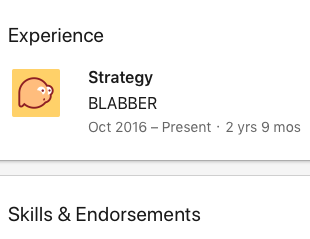 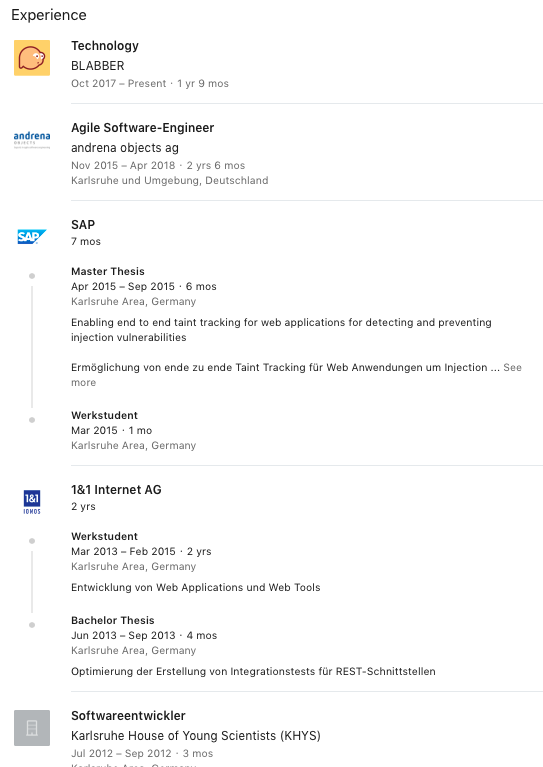 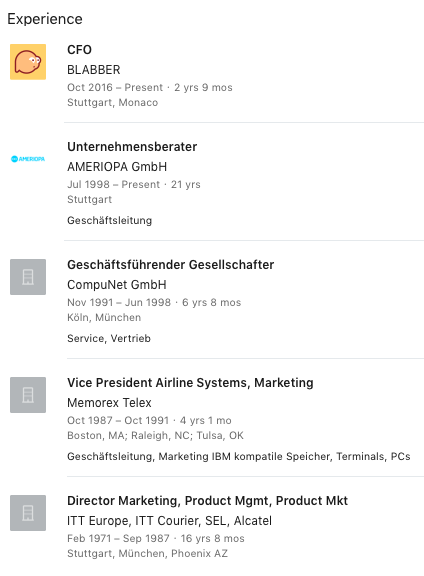 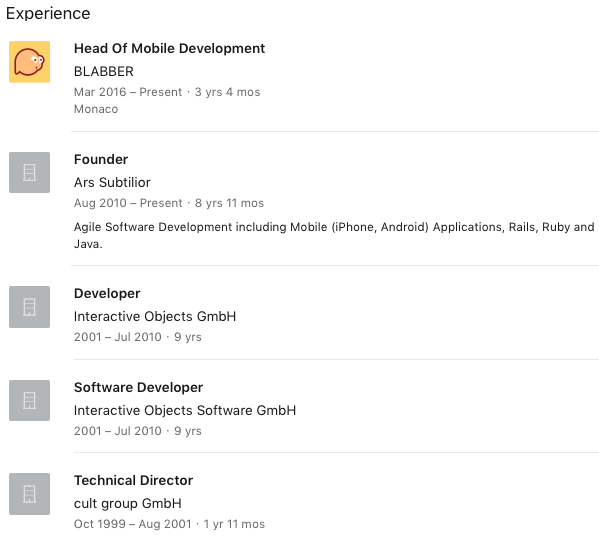 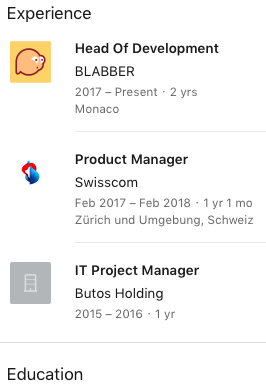 Their “groundbreaking” startup idea is as old as the sea, and whoever tries to bring it to life goes off after all. Why could that be?..

I’m talking about the concept of social media, where users receive tokens as a reward of using the above-mentioned resource for communication. Yeah, right, Blabber is a cocktail of Durov and Zuckerberg in Blockchain syrup served with fictitious “experience” ‒ the classical recipe of shitcoin mishmash. Business, according to the fathers of the company, hides in advertisement: companies pay to the social media for the promotion, while the social media pays to its users. Win-win situation.

But my guts, for some reason, tell me that these boys are going to fail. What else should be expected from people who lied about their experience right in the first lines of their website? In addition to that, they still can’t make up their mind about what kind of Blockchain protocol they’ll be using in their brainchild. Here’s what they write in whitepaper:

And here’s how the website neets us from the very beginning:

So, who is whose killer in a bottom line?

For all the startup needs the founders are planning to collect from 5 to 15 million dollars, the half of which they want to spend on marketing and promotion. Since when the price for a working social media dropped down to $2,5 million? Or am I missing something?

I guess you’ve got the moral of the story, which is “don’t trust immodest frauds”. Let’s move along.

The next offspring of the same founder’s team ‒ Crypto Market Ads ‒ isn’t ashamed of itself, so reveals its true nature from the start. Everything becomes painfully clear when you see the following banner. Here they promise to spend $900 000 for their bounty program ‒ impressive, huh? But I guess we all would agree that for these money they should better hire an adequate designer who knows how to actually draw ‒ not how to trigger epilepsy. 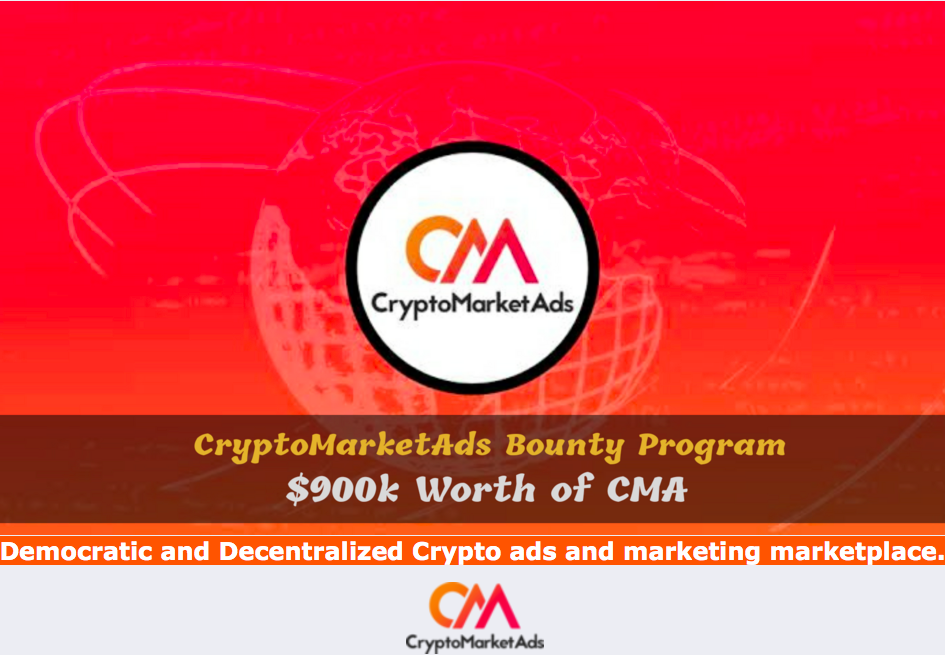 Bad news, guys, all this fortune of tokens will be distributed only in September 🙁 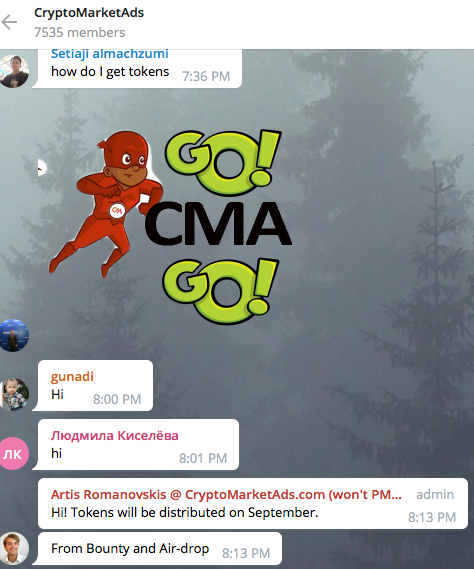 The project has an ambitious dream of becoming a huge mediator between freelancers and clients on a cryptocurrency market niche. It’s not typical to restrain yourself in this way right from the beginning ‒ at least I haven’t seen anything similar in case of really good & promising startups. But, hey, we’re talking about CryptoMarketAds.

The founders offer us the plan that runs as smoothly as a Swiss watch. The freelancer, for example, publishes his resume where he lists all the skills he mastered, like writing writepapers, translate a website on Turkish, or advertise innovative startups in his mega-popular Twitter account. Clients review all the assortment of candidates and decide those who suit them best, after which the chosen ones receive the “frozen” payments in tokens. Frozen ‒ because they turn into real money (if this can be said about CMA tokens) only after the task is completed by freelancer. That’s Blockchain, motherfucker!

Again, the idea is as old as the world itself, both with or without Blockchain. While the founders promise users tons of money ‒ all thanks to 10% commissions taken from the payments ‒ only those who received tokens on an equivalent amount of 3 ETH will be able to withdraw their salary from the website. Thus, you shouldn’t wait for quick and easy money while using this juggernaut.

Moreover, they couldn’t but bring us even more joy with their “Use of proceeds” plan. Where are you going to spend 25% of the collected funds, on research? Research of what ‒ Turkish translators or the sense of living? Calm down, you won’t find both.

And here are some more funny details in the business plan these guys offer to the wide audience. For more than 2 years of my personal experience in cryptanalysis I’ve never met a similar fork of hard cap. It feels just like a dialog with an alcohol-addict friend, who comes to you and says: “Hey, bro, can I borrow 10 grands for my business plan? No? Then give me 20 bucks on booze.”

The team of the project stems from Latvia. Just google “scam ICO baltic”, and you’ll find enough materials to lose faith in this mighty nation. Balts, unfortunately, didn’t get far from Russians in their obliquity towards scamming, bitching, and selling everything that can be sold.

What do you think, guys, should we go and drown these IEO, and IDAX exchange in general?