Satoshi is Black! How hip-hop culture has taken a fancy to Bitcoin

Astute Jay-Z, forgetful 50 Cent, a former drug dealer advising a cannabis ICO and other hilarious, but logical stories about the relationship between rappers and cryptocurrency.

A young youth, yo rockin the gold tooth, ‘Lo goose
Only way, I begin to gee off was drug loot
And let’s start it like this son, rollin with this one
And that one, pullin out gats for fun
But it just a dream for the teen, who was a fiend
Started smokin’ woolies at sixteen

Life is hard when you’re 16 with gold teeth and not enough money for decent clothes. Especially in a black neighbourhood where 80% live on unemployment benefits and half deal drugs. When you’re going mad because there’s nothing to do and the girls don’t want you because you’re a deadbeat who doesn’t have a gun.

Cash, Rules, Everything, Around, Me
C.R.E.A.M.
Get the money
Dollar, dollar bill y’all

To try to solve this problem in the past, a black guy would find a gun, rob a grocery store and be put in jail. Or imagine all that to write some verses. After all, hip-hop is the music of self-made men and the oppressed. If Fitzgerald wrote Great Gatsby in the 90s, it would definitely have been accompanied by a dope beat.

But today black guys are moving to the rhythm of Bitcoin. Oh yeah, baby!

Figured out I went the wrong route
So I got with a sick ass click and went all out
Catchin keys from across seas
Rollin in MPVs, every week we made forty Gs
Yo nigga respect mine, or anger the tech nine
Ch-chick-POW! Move from the gate now

Sometimes it seems that not only Jesus and the US president were black, but Satoshi Nakamoto too. Only a 16-year-old with gold teeth could think up something so hyped that it can lift any sensible guy out of the ghetto and to the moon. No one has to rob grocery stores to have cash, chicks and sweet rides anymore.

We’re only kidding, just in case you were wondering 🙂

Wu-Tang Clan member Ghostface Killah decided to help his brothers get access to digital gold and has started to install cryptocurrency vending machines alongside his partners. They are also knocking up an online platform that will make it quick and easy to buy cryptocurrency for fiat money. During the ICO, Cream (that’s right, in honour of the track) Capital plans to raise 30 million dollars. The CNT token will give its hodlers all sorts of bonuses when using their services. There’s no more info at the moment, but the message is clear: Crypto, Rules, Everything, Around, Me!

I’m the one-man army, Ason
I’ve never been tooken out, I keep MCs looking out
I drop science like girls be droppin babies
Enough to make a nigga go cra-a-azy

Ol’ Dirty Bastard has been dead for 14 years, but a cryptocurrency is being launched in his honour. The musician’s son has decided to release Dirty Coin (ODB). Everyone who buys this token on the TAO blockchain will be a sponsor for Bastard Jr.’s new album and have the opportunity in the future to get their hands on all sorts of goodies for fans (concert tickets, autograph sessions and merchandise) for mere pennies. There you go, a young black guy and he’s already making his own cryptocurrency. Good man. They just need to do something with the name – at the moment, Dirty Coin sounds like an obvious ICO scam promising to revolutionise the world of escort services.

The most successful black businessman and rapper Jay-Z has been on the crypto scene for ages. He sold concert tickets for BTC before it was mainstream. And why the fuck not? He’s got so much “money to burn” that he can afford to experiment once in a while. If it didn’t work out, no one would have known. And now, riding the wave of success, he can blow his own trumpet. Recently, Shawn Corey Carter invested in popular investment app Robinhood, which Snoop Dogg and Nas had already put their faith in. Rumour has it, incidentally, that the latter has links to Coinbase: it’s said that he gave them some money way back in 2014 and is already skimming off the cream. Basically, these guys know how to avoid scam ICOs and shitcoins.

Is it possible to have a rapper without weed? It’s doubtful such a specimen even exists. So there’s no surprise that The Game is listed as an adviser to the Paragon ICO. The startup plans on using blockchain to combat the black market for cannabis in the states where smoking it is legal. Like, everyone will be able to see where all these sativas and indicas are made, who is selling them and who is buying them. In addition, the team plans to grow some crops themselves and set up a coworking space for rastamen. They’ve come to the right place – The Game will certainly be able to give some good advice. Back in the day, the rapper was kicked out of university for drugs, but he didn’t let it get him down and started to earn a living from dealing. So it’s just one of those times when all the stars align.

Anyway, the sickest story so far involves 50 Cent. In 2014, he released his last album (so far) Animal Ambition. And sold it for Bitcoin! Back then, those sales were worth $400k at an exchange rate of $662, so he ended up with 604 BTC in his wallet. And only remembered about them this winter. This is a tale so fantastic that even Dickens and his Christmas Carol could only dream about it. 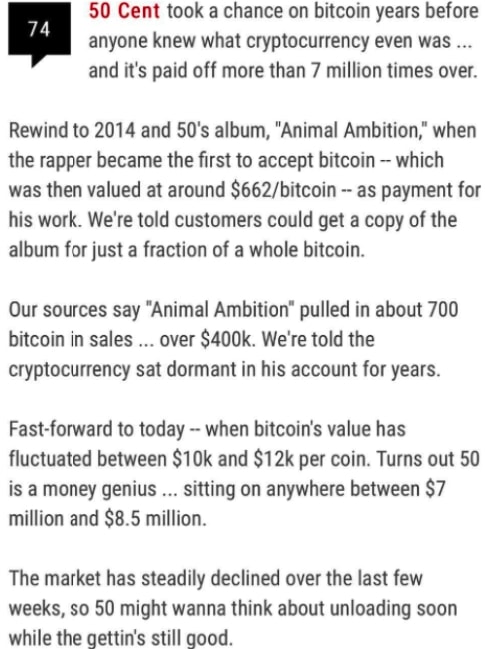 But only if it’s true, because Curtis Jackson is quite the wheeler-dealer and trickster. Firstly, he declared a fraudulent bankruptcy to avoid paying compensation as a result of the lawsuits and secondly, he’s stuck in a creative rut and wants to stay in the limelight.

To sum up, rap and crypto are made for each other. Loads of hype, cash and Lambos. But we prefer the development of blockchain itself to all the fuss surrounding it. On the other hand, it’s definitely a positive thing that cryptocurrencies have become a serious part of the mainstream. Indeed, alongside the comical cases, it will find a lot of useful and cool applications.

That’s why we have an idea for a startup… We launch RAP Coin and raise $50m from an ICO. We immediately blow 10 million bucks on a fucked up party with Lambos, golden Escalades, coke, weed, hookers, whisky and the best sound system in town. Oh wait! That’s already happened 🙂

The rest of the money will go towards creating a foundation that will take promising rappers from the mean streets, dress them in decent gear, introduce them to hot chicks and producers, and give them rubber guns, gold chains and new Jordans. Of course, only through blockchain. They will subsequently grow into new stars and – if they don’t snuff it from an overdose, get sent to jail or go bankrupt – will certainly reward investors with 20% of their income for 5 years.

So, friends, forget about all the shitty ICOs you’ve just heard about. The future belongs to RAP Coin. Feel the flow!

If you really want to help reveal scams and have blockchain move in the right direction, send us info and share your leaks and findings.  We’ll post everything and smash the scammers into moon dust.