My Name Is Khan. The blatant indicator of scamming crypto startups “Updated”

11 projects of a scammer, who turns into shizit everything he touches. Read it to avoid being stiffed by frauds.

Remember that 2010 Bollywood film “My name is Khan,” where the main character ‒ a Hindu Muslim ‒ travels through America to reach the President and tell him “my name is Khan and I am not a terrorist”? Well, in case of our today’s hero, Shehzad Khan, we would see a 5-hour road trip movie, where this man rides through the countries and faces his investors, whom he left dead broke, and tells them “my name is Khan, and I am a fucking scammer.”

Our attentive reader recently noticed that Michael Soeterbroek, who was the main character of our recent article and a figurant of numerous fraud schemes, is in friends with Shehzad Khan ‒ this couple literally found each other. And now we’re happy to share our observations with you. It turns out that Khan, just like his BF, is a never-failing indicator of a scamming project ‒ here are some of the startups where he managed to make an appearance. 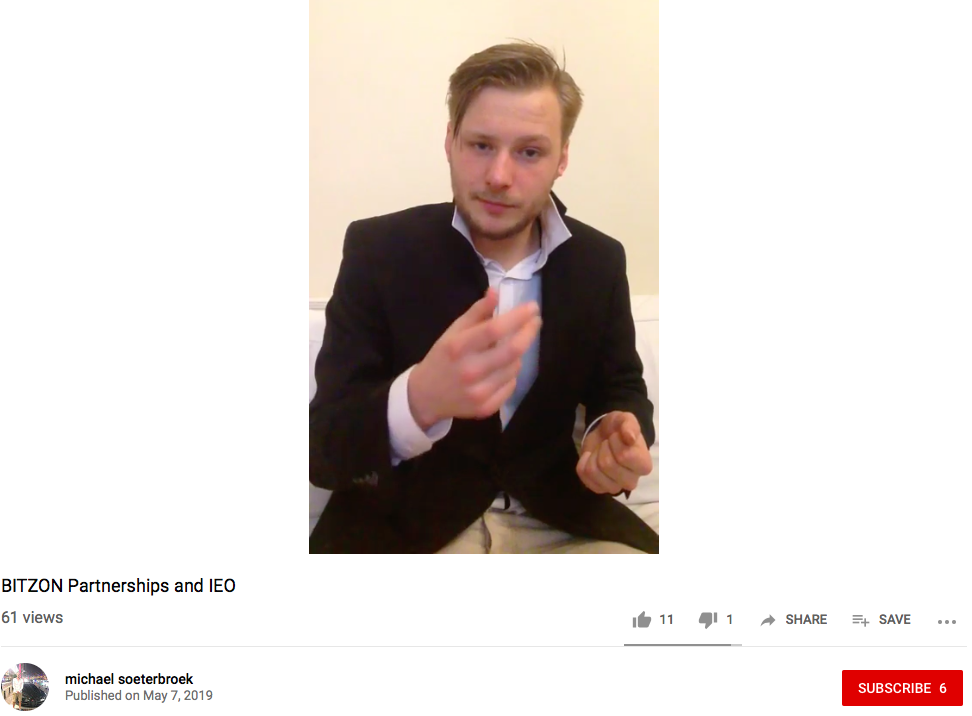 Khan is still framed as a Chief Technology Officer.

These guys cocksurely want to collect about 100,000 ETH in order to create “our own economic ecosystem that will take e-commerce to a new level.” All of its “new levelness” consists of the absolutely pointless cashback service, where buyers receive BTZ coins after making purchases through Bitzon online shop (which currently has the only one product ‒ iPhone X).

In addition to that, the whitepaper promises that the token will continuously grow in price, but the reasons for this aren’t specified or justified. Why the hell the token exists at all seems to us like a riddle, too. I’ll eat my hat if these motherfuckers will gather the cash and won’t run away. But, I guess, even if the ICO fails (which has almost 99% probability), we won’t hear a lot about these guys anyways.

Seems like Bitconnect 2.0 got a serious rival 🙂 The founders of this “revolutionary” startup conducted the sale recently, and now are packing their Telegram channel with fake reviews and permanent airdrops.

Of course, in the Cloud-cuckoo-land the founders inhabited, the SEY token promises a breathtaking growth. Of course, the reasons for its price hike exist only in the minds of these frauds. Check their whitepaper if you don’t believe me ‒ you would find nothing except for waffle and empty promises.

In Shehzad’s LinkedIn we find out his status in the project ‒ CTO, as usual. The “scam indicator” didn’t fail us by far.

Our golden boy Khan can be found neither in the AssetStream whitepaper nor on its website. However, the project is already included in his career history list on LinkedIn.

The founders of the ICO have no experience in Blockchain startups creation or management and work in a joint which seems to be known only for these guys. This is a blatant and poorly made deceit, which, we hope, you won’t get into.

The grounding for yet another invention of the wheel is obvious, especially understanding the fact that the project has no goddamn chance of overtaking his competitors. The only goal of its founders is to snatch as much money as possible and to walk off into the sunset. Good luck, assholes.

Here Shehzad has the role of the “experienced project advisor.” We won’t talk about the numerous spelling mistakes the website is notable for ‒ you can see everything with your own eyes, and make the right implications. 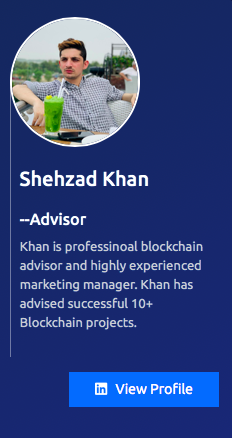 By the way, the whitepaper from Zoptax is strangely similar to the ones made for Bitzon and AssetStream. It’s almost like they were done by the same cack-handed designer…But, of course, these all are just thoughts aloud. 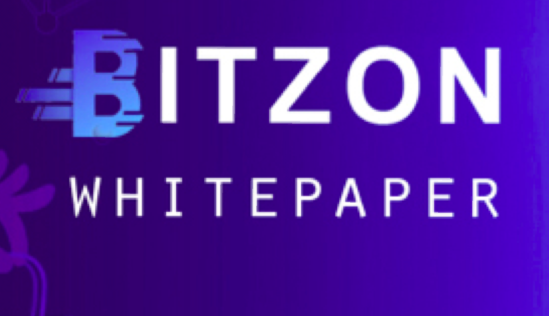 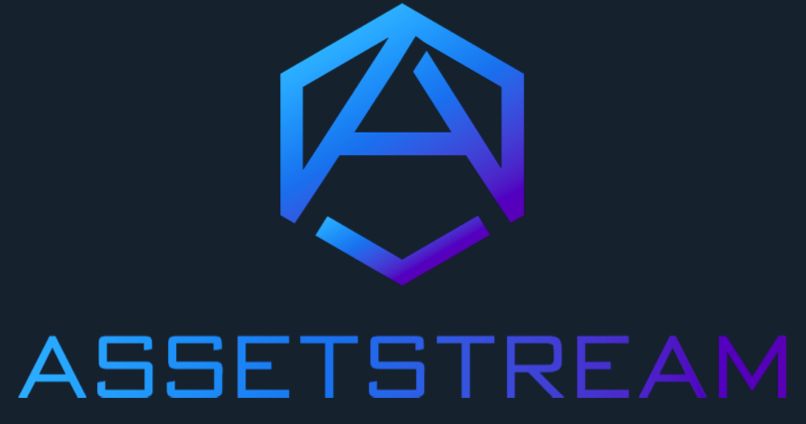 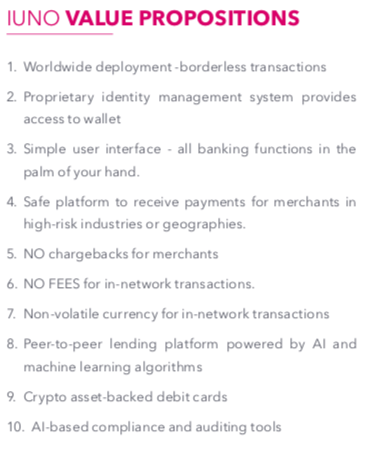 Wait, how big is the discount? 50% off? Scammers ‒ young and old, beginning and experienced ‒ if you are reading this, don’t repeat the mistakes of IUNO. This is one of the most flaming indicators of the desire to fuck buyers up and ooze out. 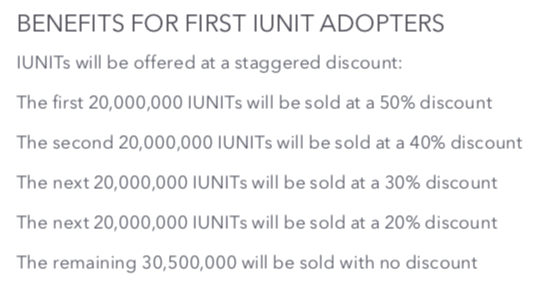 The Telegram chat has the same shit as Seyblock, which is emptiness and oblivion. Founders could at least try to make the place seem inhabited. But, of course, that would be too complicated for guys, as they obviously don’t give the smallest fuck about their investors. 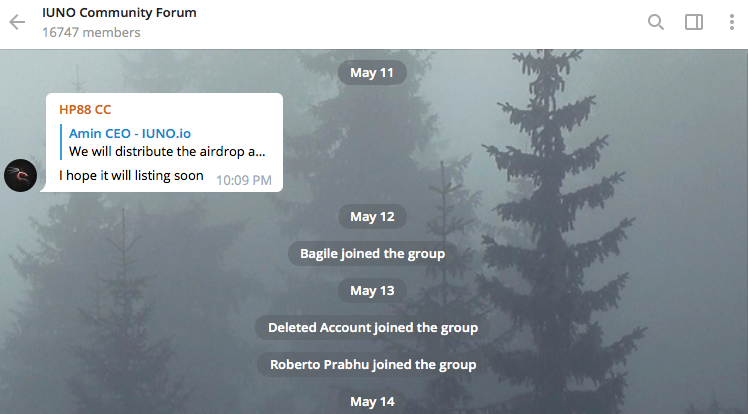 IUNO’s ICO somehow managed to screw people over $3 million, but, for the last year, it predictably didn’t get off the ground not in the slightest way.

The adviser Khan kindly looks at us from the startup’s main webpage. 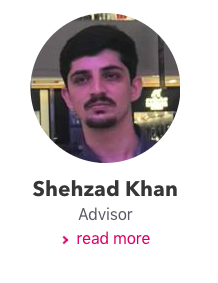 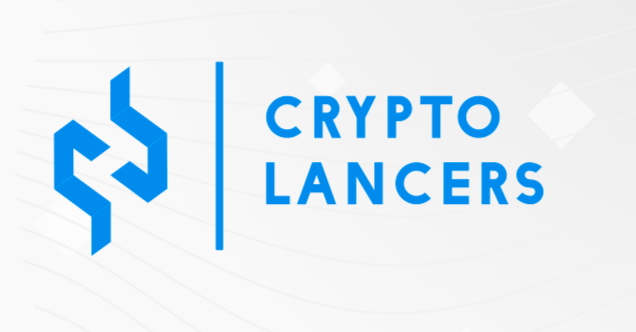 The only difference here lies in the role of Shehzad in the project, as he’s not only the honorable advisor of the scheme but also is its co-founder! 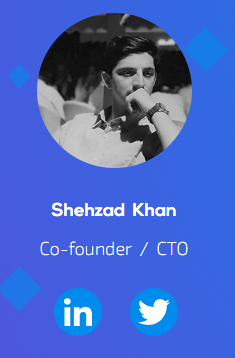 Website for freelancers on Blockchain is not that bad concept by itself, but when it comes to its fulfillment, we shouldn’t be waiting for any kind of results from these “founders.” An excellent illustration of this statement is the fact that the Github of this project hasn’t seen any activity for more than a year. The startup is basically wasted from its inception.

In our case, the creators are planning to buy up solar panels, set them in Africa, and sell the accumulated electricity to the impoverished continent’s regions. Of course, the project didn’t avoid the fate of being “innovative” and Blockchain-based. 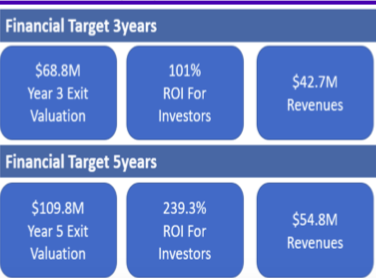 Currently, the second of the three ICO phases is nearly over. Guys managed to gather 2 out of 30 million dollars of a hard cap. I really wonder, who the hell thinks that giving these scammers/advisers your hard-earned money is a good idea?..

Because, as far as we’re concerned, the startup is a flagrant deceit, with a slightly different target audience ‒ people with a faith of Islam. The founder and the CEO of the startup, on the top of that, doesn’t act much like a faithful Muslim. 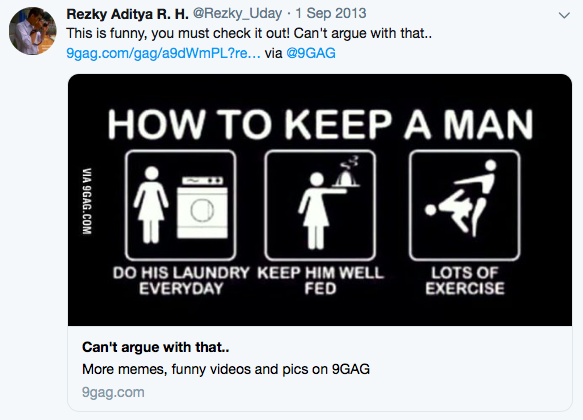 The whitepaper is either made by an idiot, or they simply decided not to care too much, because it wasn’t planned that someone would read it anyways. Here they present the statistics of the income of the largest social media like Twitter or Facebook. I’m sorry to disappoint you, guys, but the better half of their users make fun of all religions and admire naked women. Doesn’t sound like their kind of core audience to me. 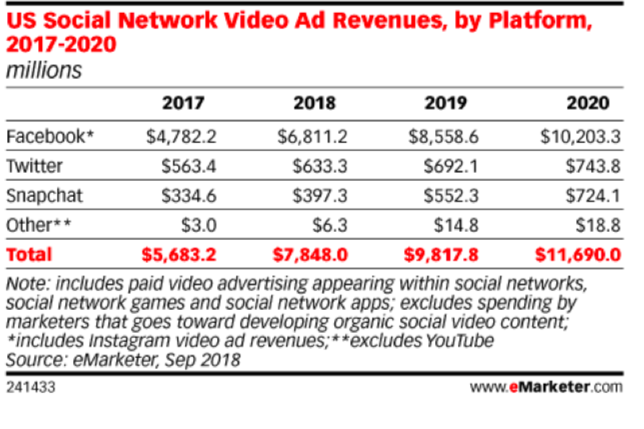 Therefore, the project isn’t really expected to bring revenue, like, at all. The founders are planning to collect $5 million, but they didn’t reveal, for what exact needs. For some unexplained reason, they made an equation between the words “religious person” and “moron.” 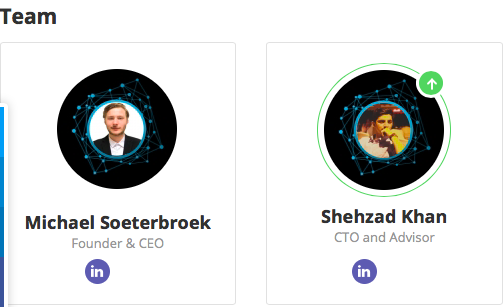 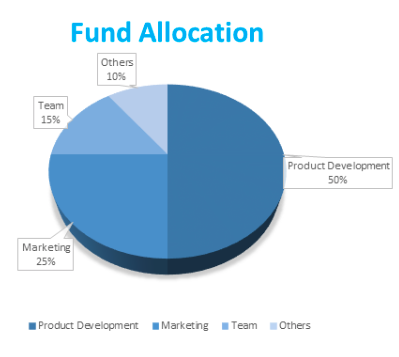 It has a model grammatical correctness, as always. 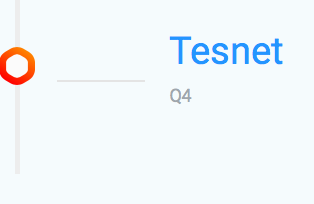 Only look in the faces of these badass crypto experts. Could you expect anything else from these inborn leaders?

Of course, the startup wasn’t immune to fake LinkedIn profiles… 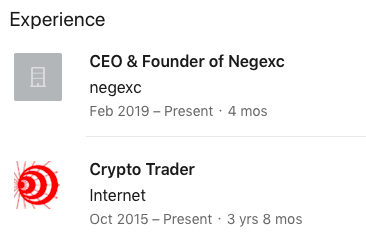 ..and Khan ‒ the alpha and omega of crypto investment. 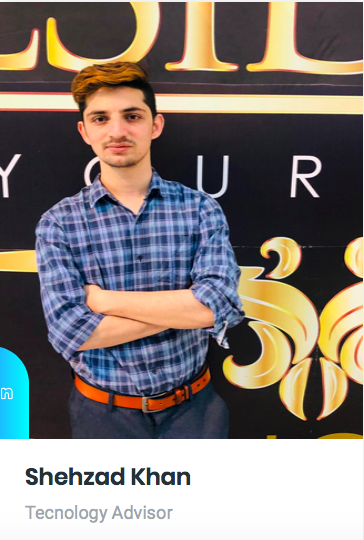 Their Telegram channel is predictably full of airdroppers. KYC? No, thank you. 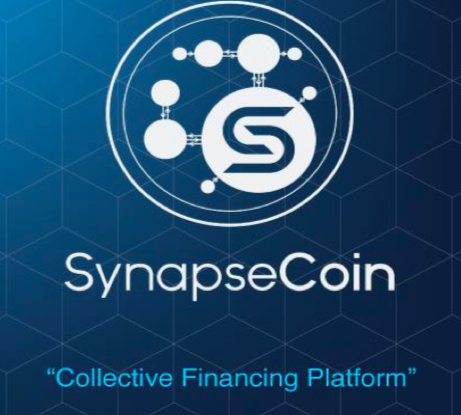 They’re planning to create an accelerator to trick out of the other startups’ money.

For those needs, they want to obtain a fuckload of dollars from naive investors ‒ the perfect crime.

Here Khan is helping the project in the role of the advisor. We don’t question his experience and skills in scamming, so the ICO promises to prosper. 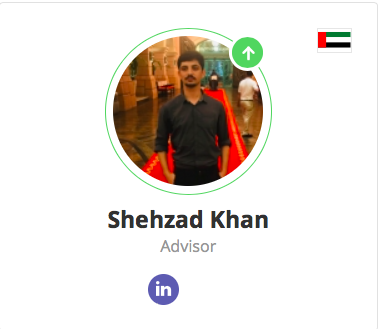 So, what do you think about this list? Imposing, right? I don’t understand what these companies think about when hiring Shehzad as an advisor, CEO, or as any other employee, whose post implies having the smallest amount of competency.

My theory is that all these eleven startups (or even more which I haven’t reveal) have a single organization at the origins. Indeed, why to repeat the fate of Moshe Hogeg and work under a single scamming pyramid for $100 million, when you can grind out eleven smaller deceits for $15 ‒ 20 million each, collect yourself a small fortune, and get your personal ticket to the Moon?

Or that is too much conspirology for a single article? What do you think, cats?

Update: Two people texted from the project texted us in Telegram and shared some facts about our well-known scammer that he was not part of team and had no relation to it. Here are screenshots

2.This is a conversation between AssetStream rep and Khan 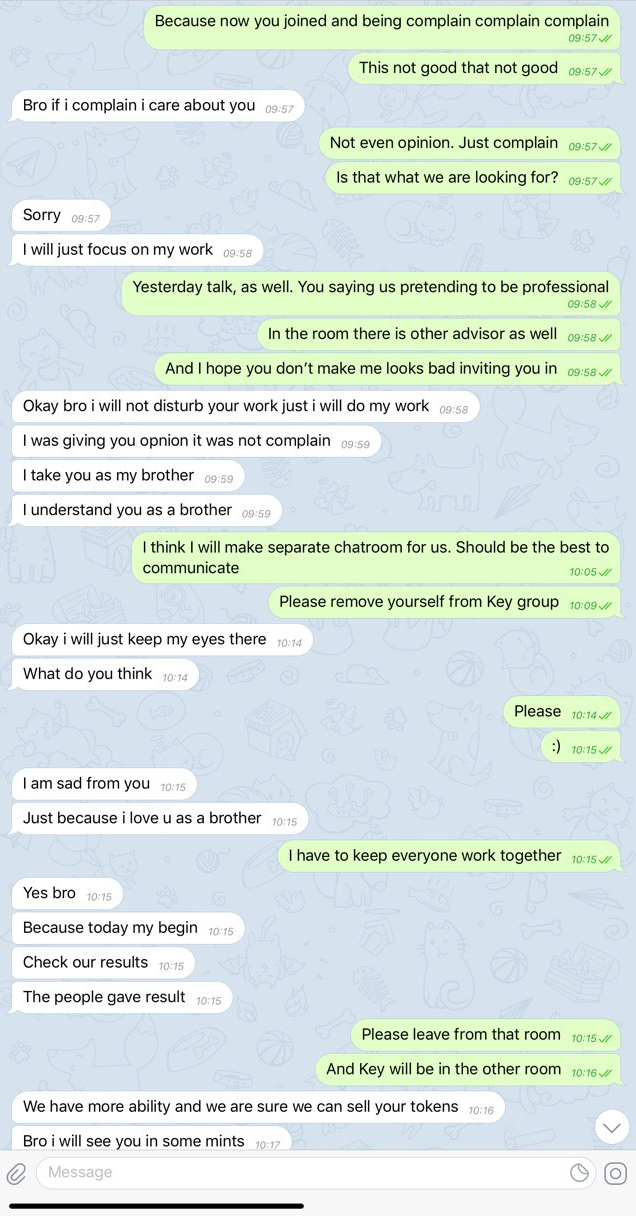 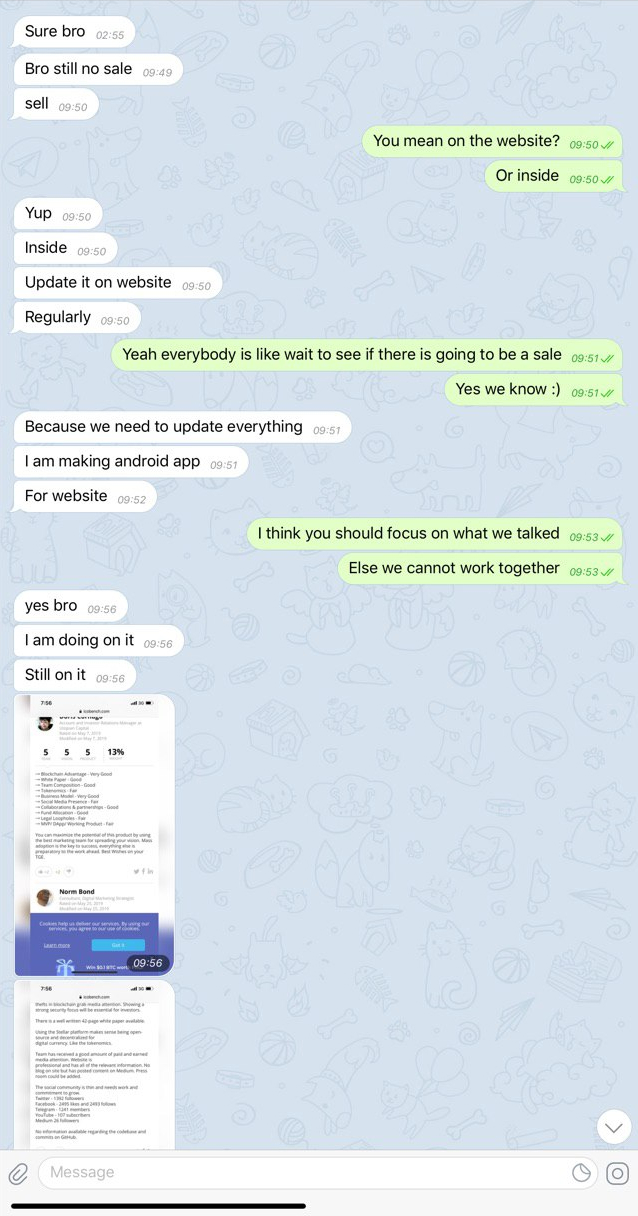