German teenagers decided to hustle on cheap outdoor advertising. The Kaulitz brothers, dead Colt, and a living member of the UBEX team as witnesses.

Remember the Tokio Hotel band? That band where the 13-year-old Kaulitz brothers got the hype around Japan and emo culture, shouted a couple of songs with unformed teenage voices, signed a contract with Sony, and became stars. More than 10 years have passed since then, and in the band’s homeland, Germany, new ambitious teenagers have appeared. It is a cryptocurrency startup HYGH.

The guys have an interesting idea. They decided not to follow the mainstream and not to invent new tricks for online advertising. Instead, they paid attention to outdoor advertising. The main thesis of the company: anyone can advertise and be advertised.

It’s plain that only rich brands like Nike and Tiffany & co will be watching us from the screens of business buildings on Shibuya. Because advertising there cost crazy money as, in fact, the real estate itself. That is why it’s clear that these ads are placed not by cheaps. There is tHYGH for poor!

You place the TV or iPad in the window of your rented apartment, in a fast food restaurant or a bookshop. Registered in the HYGH system, and get orders immediately. For example, there’s a serial killer-rapist showed up in the neighborhood. Let’s prepare: Samuel Colt himself will knock at our door soon. Did he die? Did the company go bankrupt? Well, ok, but you get the point, right? It turns out as inexpensive outdoor advertising with accurate geo-targeting.

Here are the minimum requirements for a monitor host:

And here is for the advertiser:

Guys got to the deal with responsiblity. Bought native advertising in Forbes and made the MVP. This is a definite plus. I was able to pick up 3 locations in Berlin where I would like to advertise Adidas shoes. Played with targeting settings and was pleased. Not Facebook, of course, lags heavily and hasn’t been launched yet but the logic and mechanics are shown quite clearly. 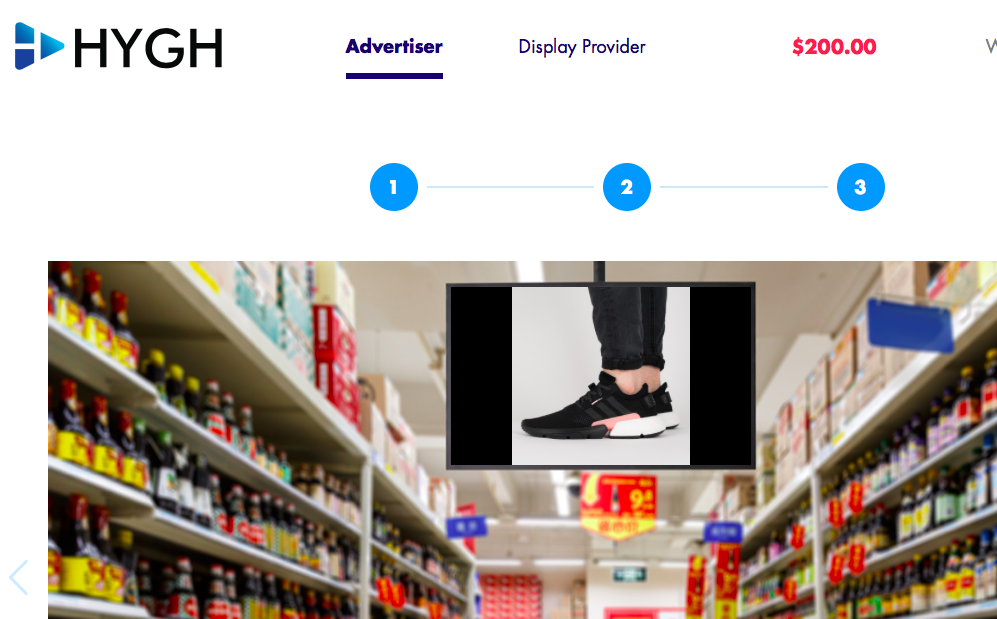 The only thing isn’t clear is how this business is profitable. Outdoor advertising is being used mainly by corporate giants these days. Every year a lot of money is allocated for these needs that could be spent on improving the products or conditions of employees. But nah, this is brand recognition. Pepsi needs to kill Coca-Cola, and Nike – Adidas.

Small businesses choose cheaper and reliable channels. To specify: Google Adwords, Facebook Ads, Instagram influencers. It’s just there that you can actually find your target audience and build a trusting relationship with it.

But teenagers from HYGH promise investors huge returns in the future. You can go up 50 thousand bucks to $ 540,000!

By the way, Hard Cap of a startup is 24 million bucks and no Soft Cap. Tokens are not going to burn. It means they eliminate the lack of funds. So, they can do everything on their own? Then what’s the need in STO launch?

By the way, about the STO. Teens didn’t study well at school. So they didn’t read the rules of the SEC.

– You don’t have $ 1 million bucks worth of real estate.

– Your organization doesn’t own assets for 5 million bucks

What are the rules for investing in HYGH? 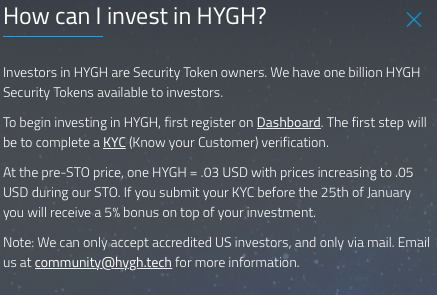 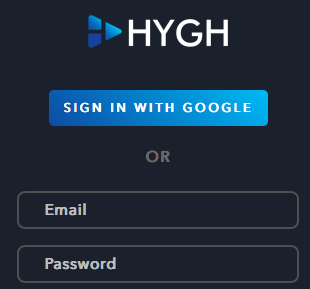 It turns out that you can invest up to $ 3000 just by registering from your Google account! Dudes, what kind of bullshit is this?

All right, let’s move on. You can find the testimonials about their platform right on the Hygh website. Although it doesn’t work yet it just shows how everything should be according to the authors’ idea.

There is a suspicion that guys made up this testimonial. And picked a random first and last name. Because they heard of it somewhere on the TV, this is a German sleeper of Polish descent Anke Wisznewski. Search engines don’t find girls with the same name either sports stores. 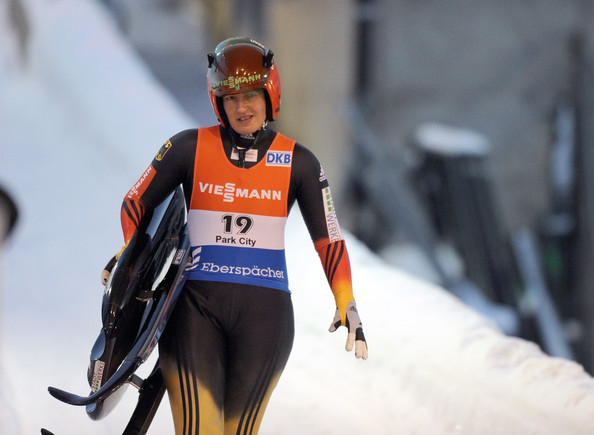 And about this person doesn’t know even the omnipotent Google.

Further, on our way are members of the HYGH team.

Со-Founder и СЕО Vincent Muller a hell of a Wolf of Wall Street. He writes about himself that at the age of 12 he founded a popular server rental company.

And it also became clear that the lovers of alts have nothing to do in Linkedin. Otherwise, there won’t be enough space in the profile to show the entire portfolio. But are you serious, Vincent? 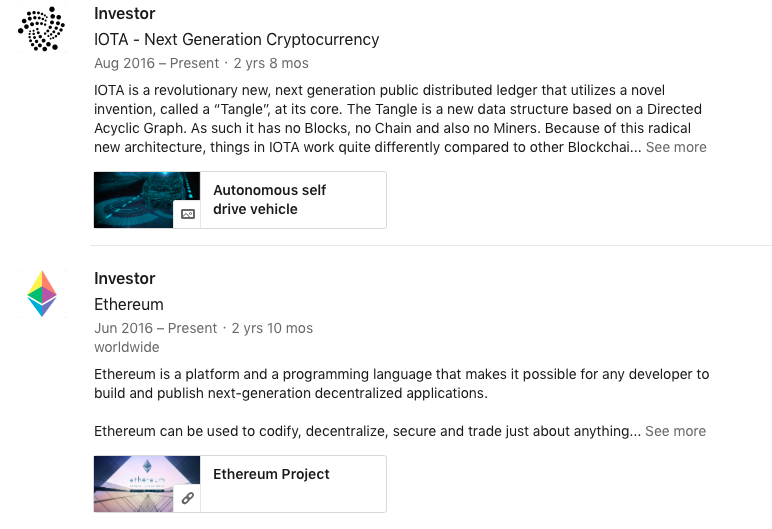 Looks like he is. СОО и Со-Founder Fritz Frey is way more of an investor than his partner. 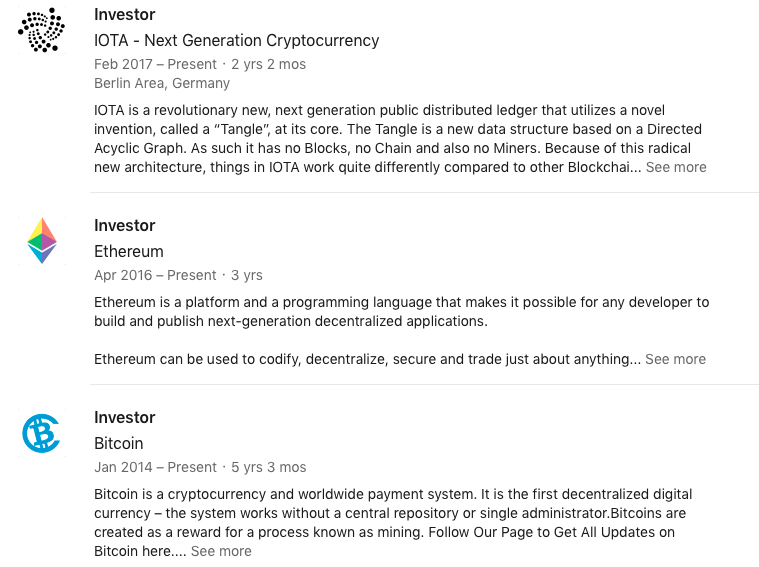 There is a suspicion that the person who did LinkedIn and the Whitepaper for the teens messed up something. Because in WP it’s COO, and not CEO ruled the business since he was 12. 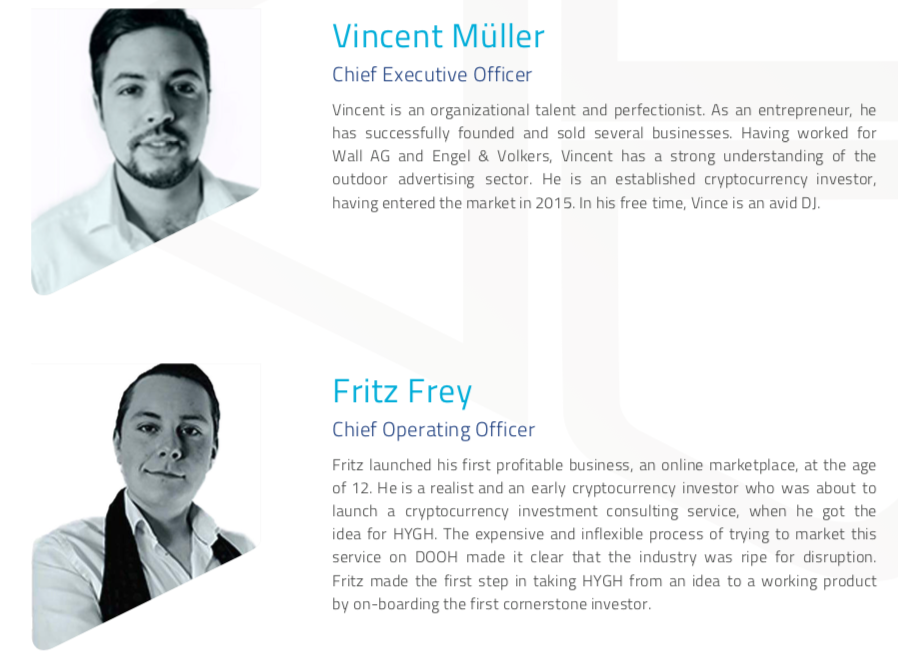 Or are they both as cool as the Kaulitz brothers?

It’s Daniel Biesuz. He has already been in Shitcoinoffering on the Ubex case. We wrote about them in the fall, and since then things for those scammers didn’t go well. 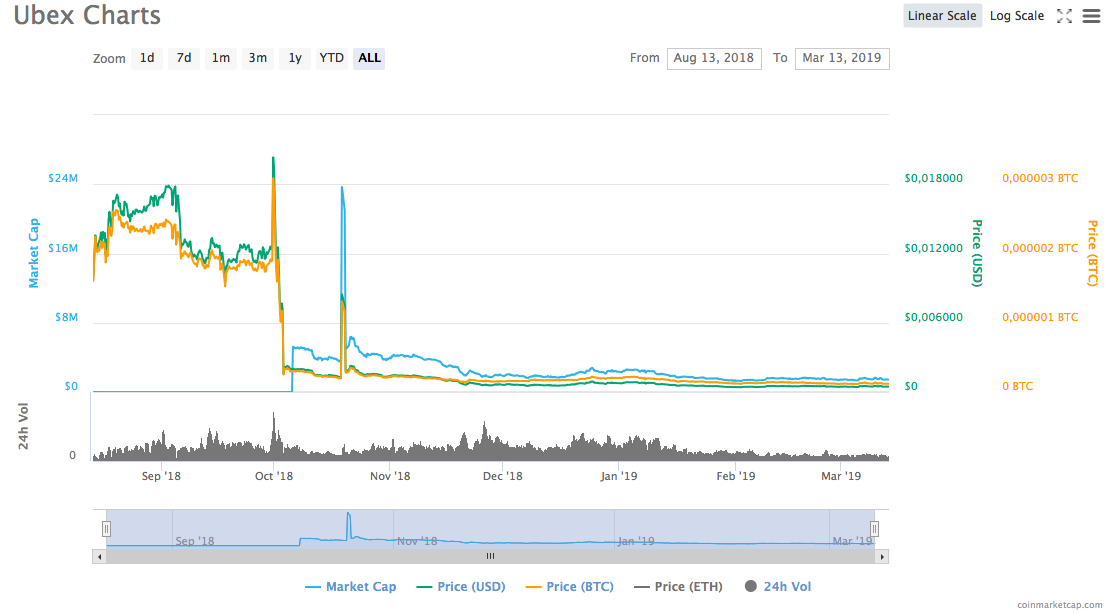 We hope that teenagers from HYGH won’t make the mistakes of their more experienced comrades. I can imagine that in a couple of years I walk chilling around Shibuya, and suddenly distract from the screen of a smartphone and pay attention to a small iPad lying on a parked bicycle. Here I watch the Grammys where Tokio Hotel accepts the award for the first jazz album in the history of a band. And next is the success stories of the guys from HYGH. They stand near Lambos and tell how they changed the world, strengthened the Blockchain’s reputation and overwhelmed investors. Yes, yes, that’s the scenario. I believe. 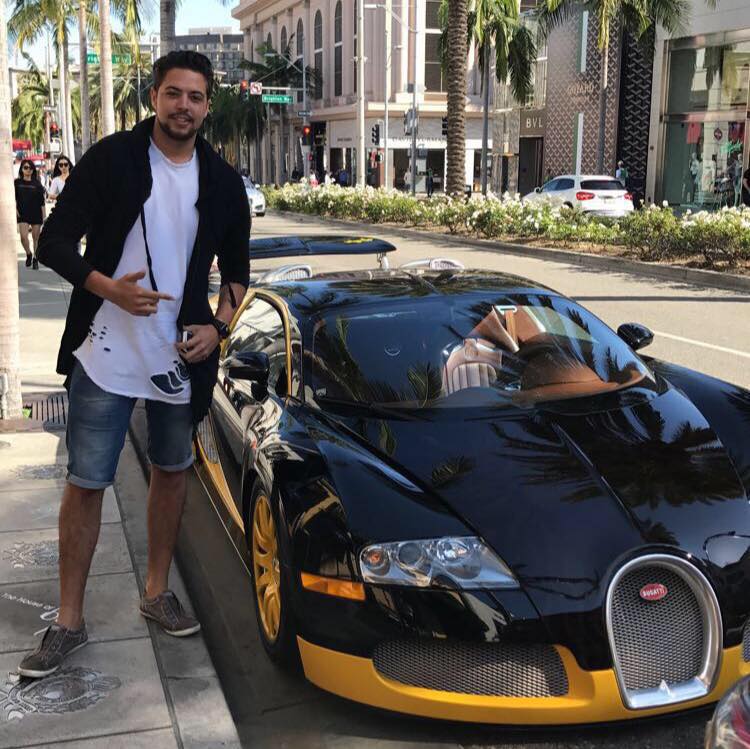 Write your opinion on the future of STO HYGH and believe in Blockchain. Together we will win!