Alexander Duzhnikov – another founder of HOQU

An office in Moscow City. The Duzhnikov brothers and Anikeev are drinking Beluga vodka and eating black caviar canapés. A video by singer Olga Buzova, who has released a pseudo cryptocurrency called Buzcoin, is playing on the big screen.

Alexander Duzhnikov: Boys, would you nail her?

Anikeev (throws a canapé at the screen, caviar flies around the office): Fuck her! She’s an old slut and doesn’t have a clue about crypto either. Did you see how much her scam made? It made fuck all. Half a million max. Not like us!

Shmonov runs in. His face shows that he is worried. He runs to the table, grabs the bottle of vodka and drinks almost half of it in big gulps.

Anikeev: Tell us then! 55 crypto projects are waiting for me.

Shmonov: Shitcoinoffering has written about us and broken down our entire scam. Now everyone’s sharing it!

Anikeev: Dry your eyes, girls. These shitheads are nobodies. We have money, fame, cars and chicks. God is with us too. Who are we, boys?
All together: The Godfellas!

A coworking space in a Moscow suburb. Roman Kaufman-Michalev is drinking his 11th coffee of the day, heavily breathing and tapping his fingers on the table.

Kaufman-Mikhalev: These guys got HOQU good, they even put me in a dress. Fucking douchebags. Although… while everybody’s talking about it, I can blame it all on my so-called “partners”. That asshole Anikiev, Shmonov, Duzhnikov brother. I hate them all. Maybe it’s is my chance to take back what the Lord has intended for me.

(Goes on Medium and starts to type) 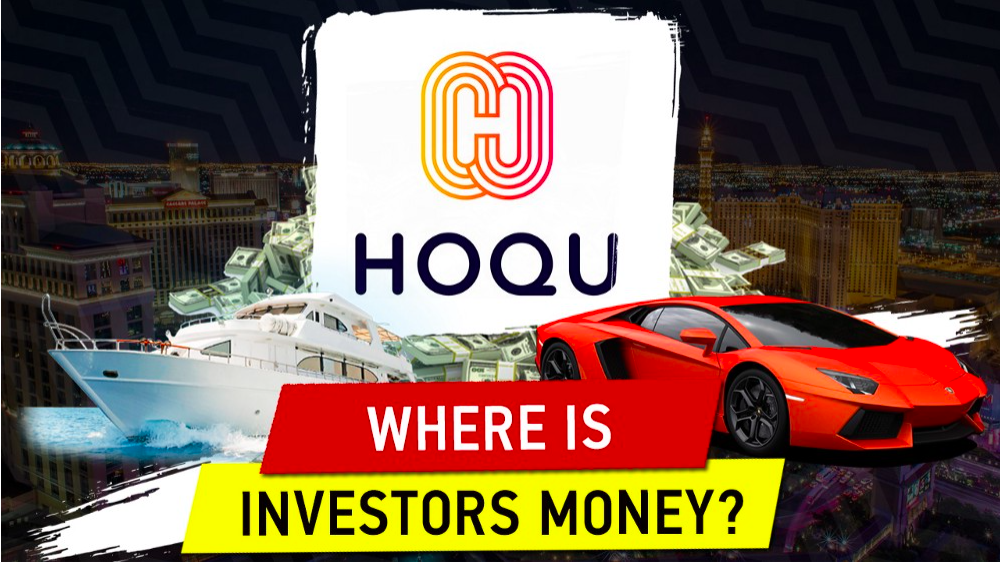 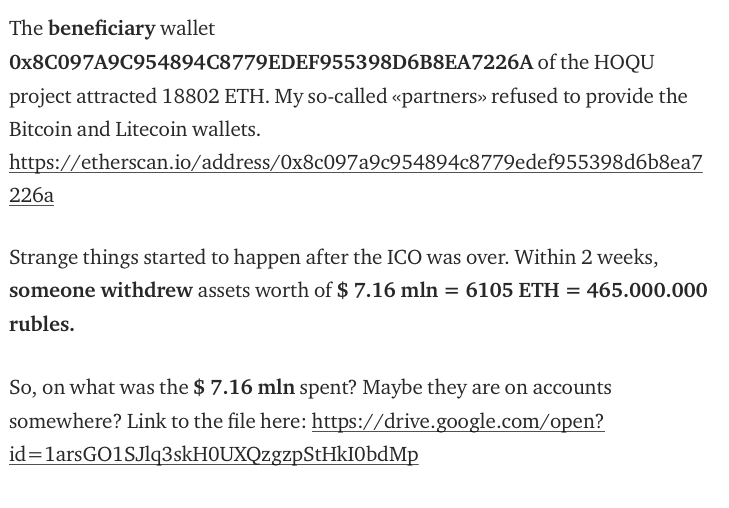 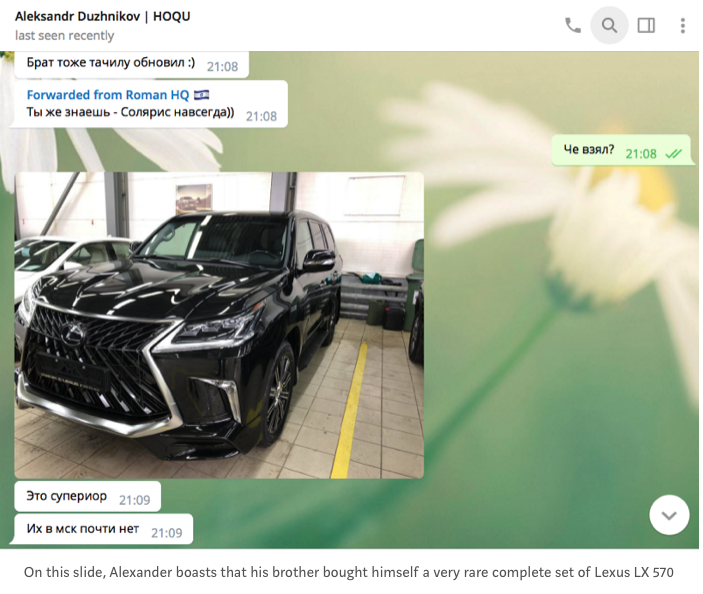 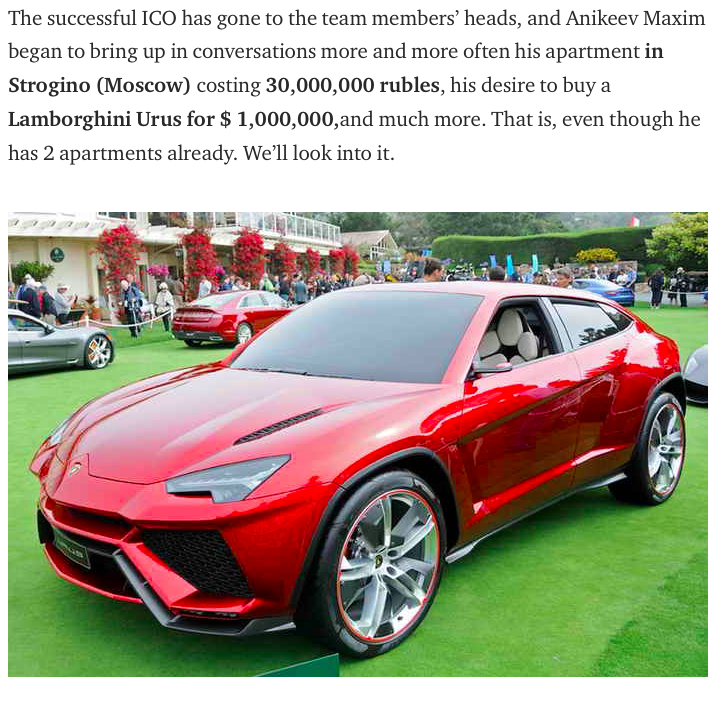 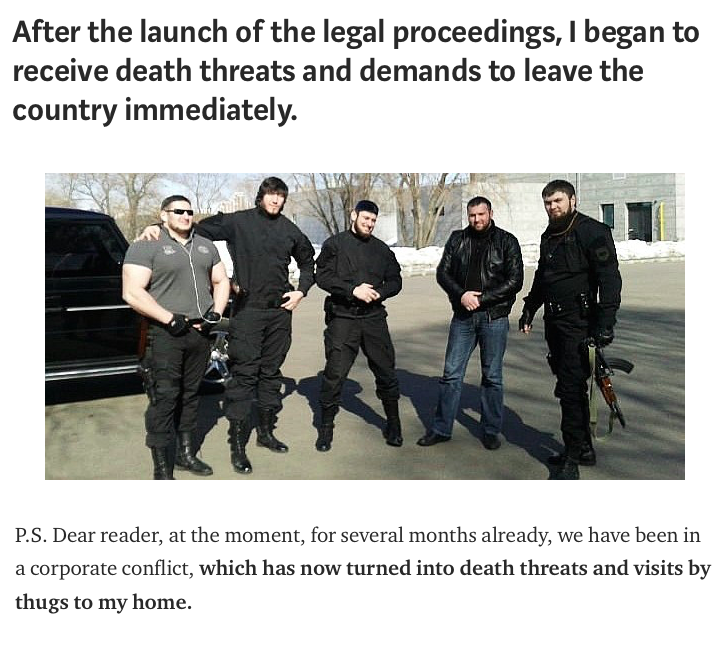 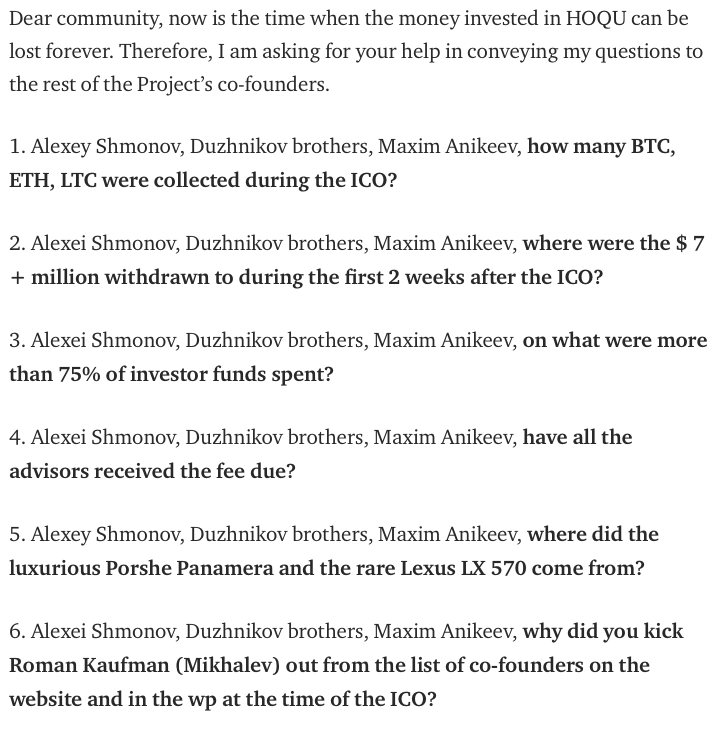 After all this, Roman sighs, leaves the coworking space, takes the metro home, falls into bed and sleeps for 26 hours.

A Michelin-starred restaurant in Singapore. The Duzhnikov brothers, Shmonov and Anikeev are drinking Beluga vodka and eating sushi with black caviar. A bare-chested Asian girl is singing about unrequited love.

Shmonov (checks his phone and gets angry): Son of a bitch, this Kaufman, this fucking Mikhalev has squealed on us. He talks about the cars, yes brothers, and about the apartments, yes Maxim, and he even mentioned the gangsters from the Caucasus. The shit has hit the fan.

Alexander Duzhnikov: What are we going to do?

Anikeev: Calm the fuck down. This is what we’ll do. Let’s write an official reply on Medium, saying that Roman has lost the plot and wanted to buy his mum a house – she loves the colour pink, he said. He didn’t get the house and decided to steal the money, so we kicked him out. Now he’s trying to get back at us. The project itself is tip-top though. Development is underway and there’s a new Telegram channel for the lemmings. And call the Chinese mafia because the Caucasians couldn’t get the job done. It was a bad idea to only transfer them 2 BTC. At least they belonged to our investors heheh. Who are we, boys?

Kaufman-Mikhalev is in a taxi. He has just escaped from Chinese gangsters, disguised as a woman. While searching Airbnb for somewhere to stay during the corporate war, he opens Medium and writes a second letter of destruction. 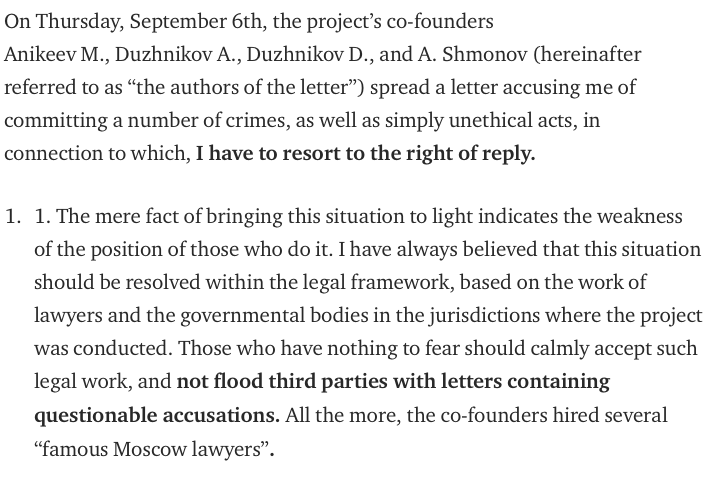 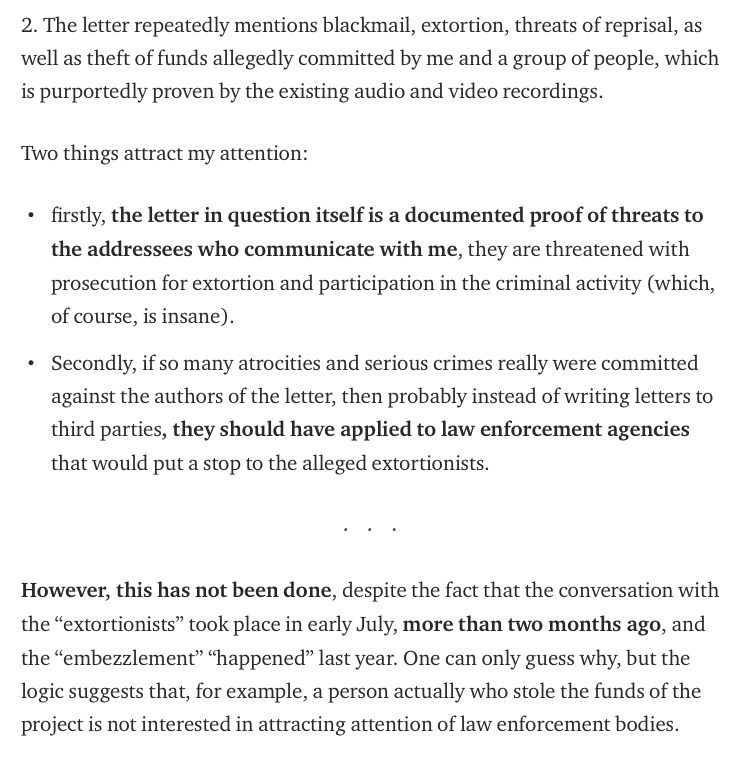 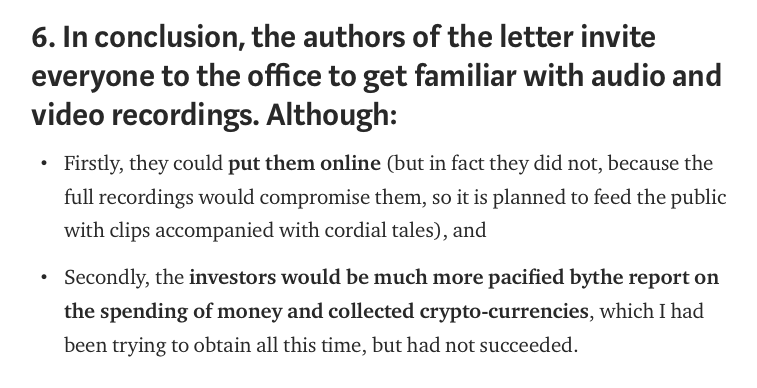 Act 3. Skeletons In The Closet

Las Vegas. Caesars Palace. The Duzhnikov brothers, Shmonov and Anikeev are drinking Beluga vodka and eating burgers made from virgin panda steaks. They’ve all just lost a serious amount at the roulette tables.

Alexander Duzhnikov: I told you to bet on black. This is America after all. They’re black and we’re red. What’s so hard?

Shmonov: What will I tell my wife? I promised to build her Disneyland in Siberia.

Anikeev: Fuck off, all of you. I came up with HOQU and made you millionaires! Now you’re going to sit here and take it out on me? One more bad word and you’ll join Roman on his investigations at the coworking space, okay? Who are we?

Kaufman-Mikhalev hasn’t been out of the house in three days. When he takes a rare look out of the window, he sees either Caucasian or Chinese men. His whole body is shaking with fear and he is dizzy with hunger.

Kaufman-Mikhalev: I know, my former friends, that you’re trying to break me, but it won’t be as easy as you think. Get your hands on a fresh batch of revelations. 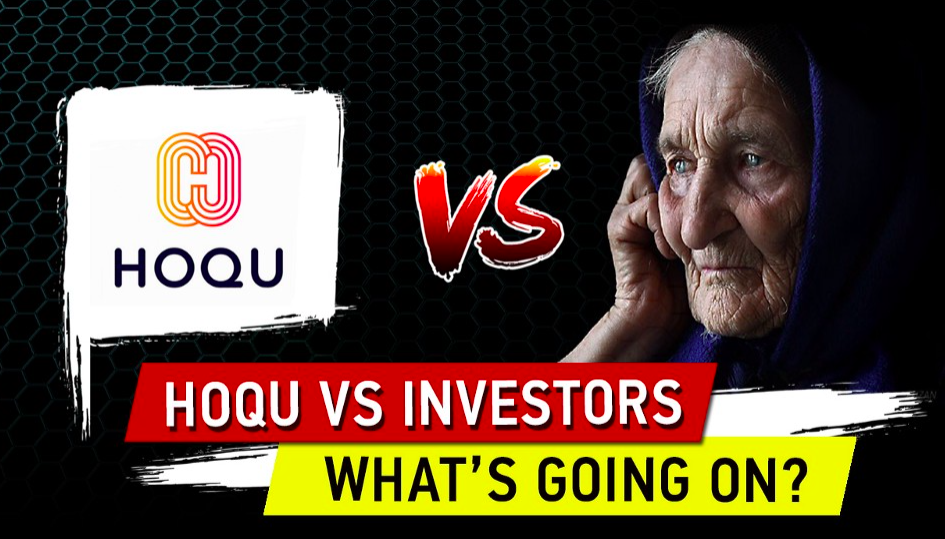 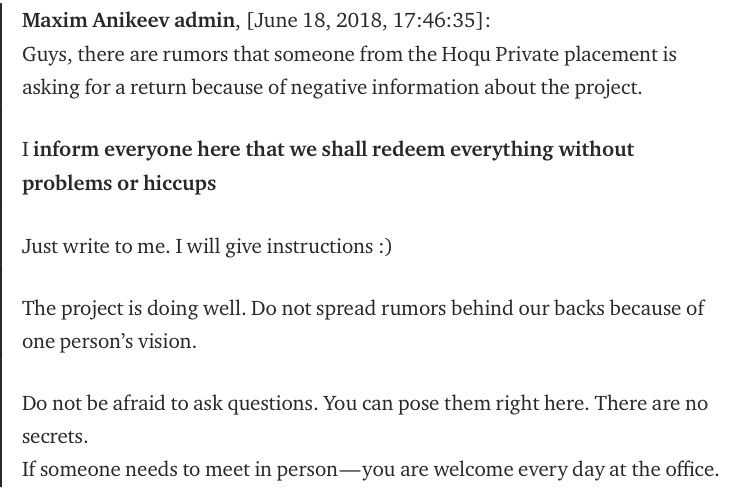 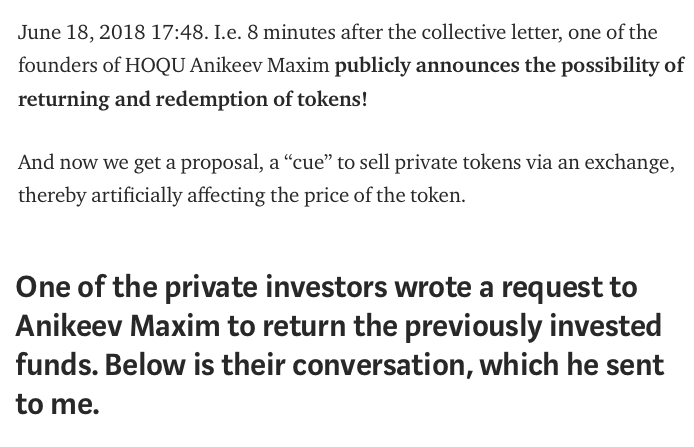 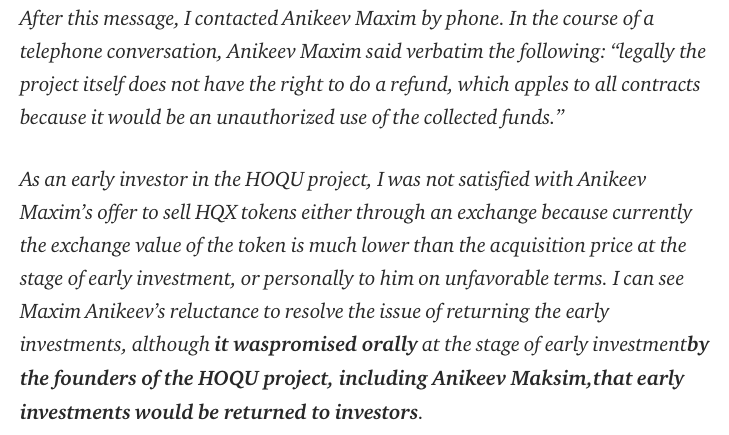 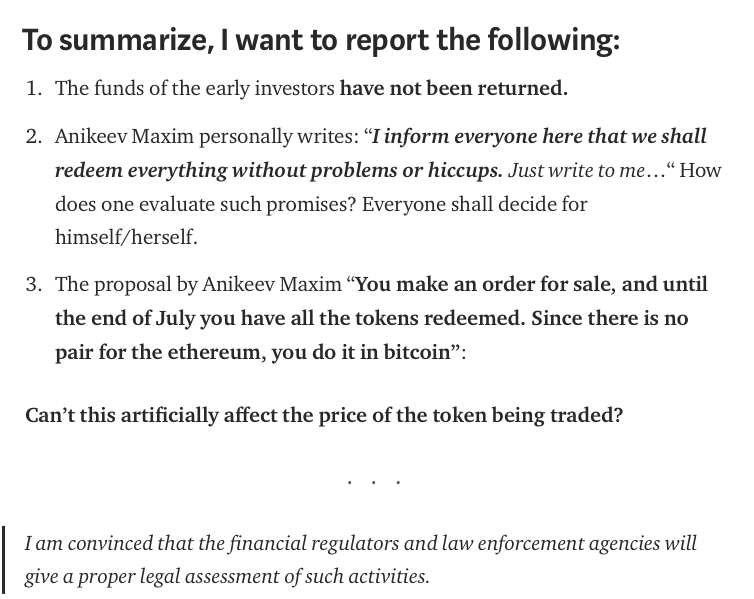 An office in Moscow City. The Duzhnikov brothers, Shmonov and Anikeev are drinking Beluga vodka and eating black caviar canapés. On the screen, Ian Balina recommends investing in yet another scam.

Alexander Duzhnikov: What are our plans, gentlemen? We have almost no money left. Should we flee to North Korea to work on the national cryptocurrency there or what? We’ll go to prison here.

Shmonov: North fucking Korea? I have a family and kids. I play football at the weekend! Let’s find a way out!

Anikeev: Great idea, man! Go for it. I still have another 54 crypto projects, so I’ll leave you here and go to work on them. We had a good run, boys. You remember who we were, right? 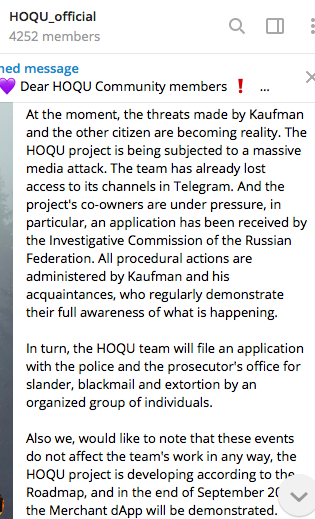 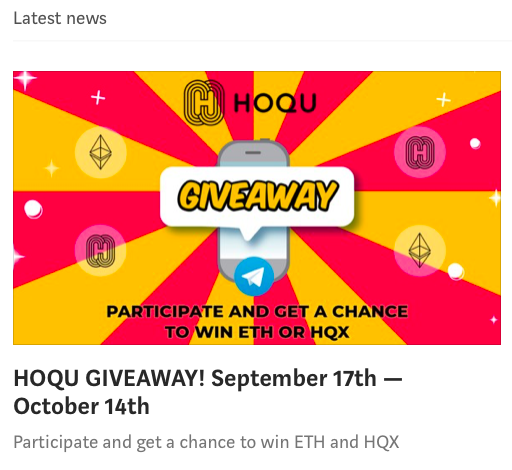 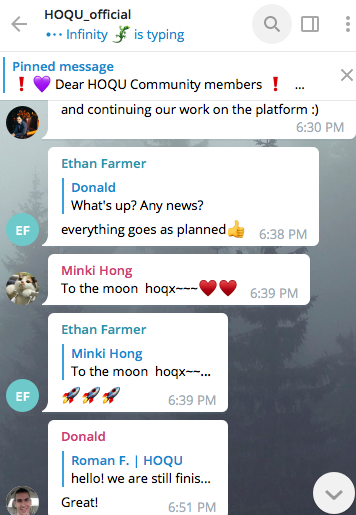 Kaufman-Mikhalev is at a Moscow law firm, preparing a case against his former friends. The lawyers broke into his rented apartment yesterday after he didn’t return their calls for two days. Roman was in a very bad way, but he was washed, fed and convinced that everything will be fine. He cheered up and made another post on Medium. 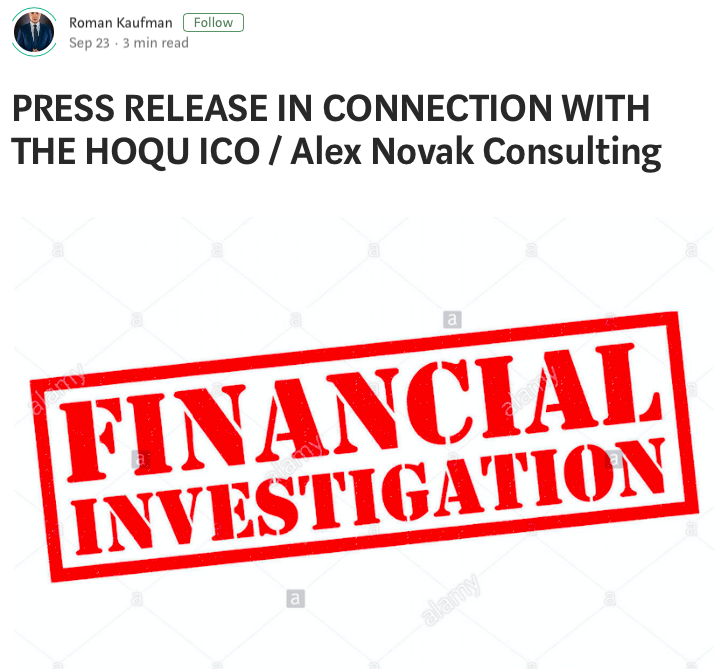 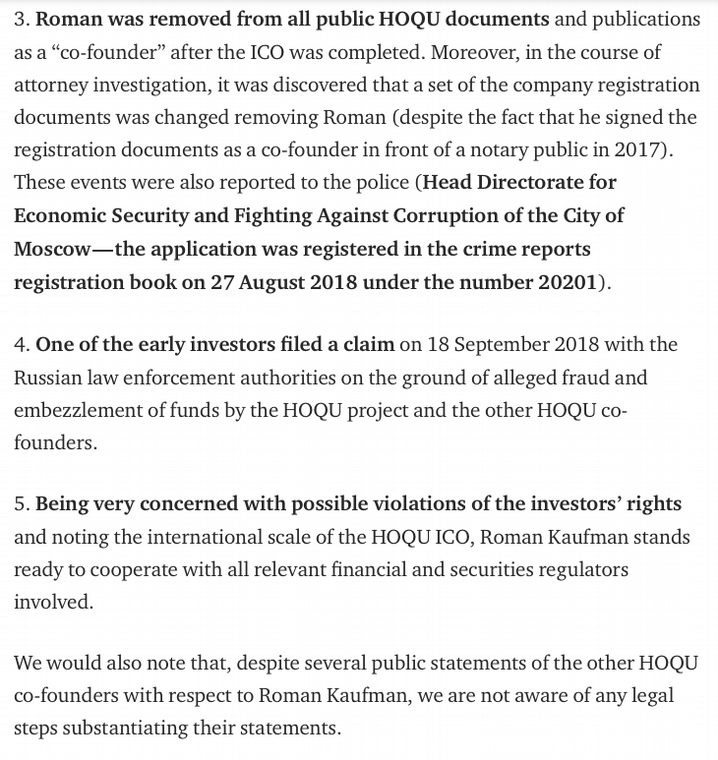 Somewhere in another dimension for the other characters: Shitcoinoffering, the investor and the ghost of the product are drinking beer and eating pizza.

Shitcoinoffering: Looks like these guys didn’t get anything out of my article.

Investor: I did. None of the HOQU founders care about me at all. They’re squabbling amongst themselves and having a dick-measuring contest while dividing up my money. It’s just a shame I found out too late. Could you warn me earlier?

Shitcoinoffering: I’ll try. I was a bit late with Ubex too, but from now on I’m going to be proactive.

Investor: Thanks. Oh, how are you doing over there?

Ghost of the Product: Same as before. They bring me up and talk about me, but don’t want to make me. You saw how they were partying in Vegas. If they’d bet on black, as the  Duzhnikovs said, maybe they would have written some code, but it’s just not meant to be anymore. Let’s have a drink instead.

The audience is already on their feet, ready to applaud, when cars with flashing lights drive onto the stage. The Russian police got on the case at the request of investors who put some serious money into the project during the private sale. While the audience left the room, investigators interviewed all of the characters. The Duzhnikovs, Shmonov and Anikeev accused Kaufman-Mikhalev of every mortal sin and vice versa. It would seem it’s still too early to draw a line under this story. The end – for now.